A constant source of terror for many people, these poisonous beasties will probably not harm you as long as they don’t feel threatened.

To minimise the risk of stepping on one, always carry a torch when you walk around the rest camp at night. If you do come across a snake, do not try to catch it! Rather back away very slowly and report it to the Manager on duty or to reception. The cautious among you may also want to check your shoes before putting them on in the morning…

The Monkeys of Kruger 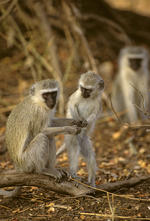 Monkeys and Baboons are very cute and can be entertaining for young and old alike. My father (being both young and old) can sit and watch them for hours. But please do not feed the primates! Remember that by feeding the monkeys, you are signing their death warrant as they tend to become aggressive and a nuisance once they start associating humans with food and, in many cases, this necessitates their elimination.

They are also adept thieves, so don’t leave food unattended and, before going out in the morning, make sure that you have locked your doors, closed the windows and securely packed away all your foodstuffs. Seriously, you don’t want a monkey inside your room – they’ll trash everything and probably crap all over the place.

At night, light from the rest camps attracts many flying insects and, with these insects, come their predators, including bats and frogs. So, remember to keep the screen doors of your bungalow closed as this will prevent these unwanted creatures from entering your room. Should a bat fly into your room by mistake, do not panic!

The Kruger National Park website suggests that you calmly place a towel over the bat and release it outside. A more likely course of action would be to go to reception and ask for assistance. Similarly, if you are standing outside, the night air is often teeming with flitting and flapping bats. If a bat touches you while standing around the braai, once again, don’t panic!

Bats are just like cute little mice with wings and will not bite unless they mistake you for a juicy bug. They are also adept flyers with a sophisticated radar system that helps them avoid collisions.

Malaria in the Kruger

©Shem Compion
Mosquito nets are an effective means of reducing the risk of Malaria.

The Kruger National Park is located in a malaria-endemic area. But what does this mean, and how seriously should you take the threat? Well, it’s not something to be taken lightly, but some foreign folks get downright hysterical. So, let’s get a couple of things straight about the spectre of malaria. The disease is caused by a single-celled parasite called Plasmodium.

It can live in the blood of birds, reptiles and mammals, and it is transmitted to humans by the female Anopheles mosquito (the genus name derives from a Greek word that translates as ‘useless’). There are four strains of human malaria found around the world. They each vary in their severity. One of the most dangerous strains, Plasmodium falciparum, is found in the Lowveld.

The early symptoms of malaria are similar to those of the flu: feeling weak, dizzy, muscular pain, fever, vomiting, diarrhoea. These symptoms can be effectively treated with medication and, provided the diagnosis is made quickly, there should be little lasting effect on the patient (although the disease can reoccur under certain circumstances).

However, if neglected, malaria can get ‘complicated’ and induce more severe symptoms. Ultimately, this could lead to cerebral malaria, respiratory problems, comas and even death.