Harvesting aloe ferox is a complex process that requires skill and diligence to successfully complete. The reaping process usually begins from June until August in order to secure the aloe plant for the following season’s harvesting process. This harvesting method takes place outdoors and is especially advantageous, in that it helps to reduce any damage that the aloe plants may incur.

Knowing that this entire process began from a few small seeds is one that may spark wonder and marvel at nature’s many life-giving capabilities. Particularly, because the aloe plant is imbued with many healing properties.

The lower leaves of a mature aloe ferox plant are carefully cut to ensure the integrity of the plant is maintained. The amount of leaves harvested per plant can range from 10 to 30. Excessive harvesting of a single plant is avoided to maintain the sustainability of annual harvesting.

©Chris Daly
The cut Aloe Ferox leaves are stacked around the pit lined with plastic to catch the sap.

The cut leaves of the aloe ferox plant are then placed on a plastic sheet that covers a hollowed-out section of ground. These cut leaves are carefully arranged in a circle with the cut part facing the centre of the circle. This allows the bitter aloe sap to drain onto the sheet without any sap escaping and thus reduces potential wastage.

The sap is collected and placed in a metal drum to be boiled. The drum and its contents are heated by a wood fire that aids the boiling process. The open fire helps remove the water from the bitter aloe sap, which becomes bitter aloe crystal chunks or ‘aloe lump’. 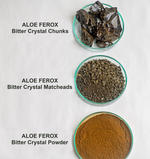 ©Chris Daly
During the boiling process the raw bitter aloe sap is rendered down to a thick dark liquid.

These crystal chunks can be further grounded to produce matchstick-head sized bits or a fine powder. Aloe ferox crystals are also known as aloin and have a detoxifying effect on the body. It is commonly used as a laxative.

The parts that remain of the leaf are taken to the aloe production factory and processed into other aloe-related products, such as gel and juice.