Warming of the climate system is unequivocal, as is now evident from observations of increases in global average air and ocean temperatures, widespread melting of snow and ice, and rising global average sea level. Intergovernmental Panel on Climate Change

©Shem Compion
Polar bear with cub in the Artic

Vostok Station, Antarctica. The coldest recorded place on Earth and home to a Russian scientific research base. What Vostok has going for it is ice, and lots of it. It is down here, on the underbelly of the planet, that we get a true sense of climate trends over time.

Since we only have accurate temperature readings with modern thermometers going back to about the 1860s, the only way we can know what temperature is doing is to look for evidence in nature. Vostok’s ice sheet is probably the most important source of “proxy” temperature information. Every year snow and ice pile up across the Antarctic and compact into a thin crystallised layer. Over hundreds of thousands of years, these build up into multi-story seams of ice.

Captured in each layer are bubbles of air which are representative of the atmosphere at the time when the ice or snow fell. Scientists have been drilling down into the ice sheet to extract deep cores.

When these come out, these have distinct lines in the ice, demarcating the different years when the ice accumulated. It’s a bit like looking at the growth rings in a tree. Looking at these is like gazing back into our deep past and scientists have managed to drill far enough down to get ice cores dating back about 600 000 years. 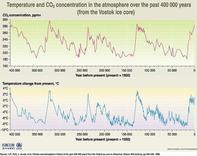 What the scientists are after is the air bubbles trapped in that ice. First, they can tell exactly what the greenhouse gas concentrations were at the time. But they can also tell what the temperature was like at the time, by looking at the ratio of oxygen isotopes present in the air sample.

Bubbles of air, captured yearly in Antarctica’s ice, show a direct correlation over time between the concentration of CO2 and average temperature. We know, without a shadow of doubt, that if we continue to push up atmospheric carbon, we will only be dragging average temperatures up, too.

We Now Know That

There is a clear correlation between greenhouse gas concentrations and temperature. Greenhouse gases have been on the increase in our atmosphere for the past 8 000 years, even though they should have been on the decline as Earth is supposed to be heading towards another glacial period.

Greenhouse gas concentrations are notably higher, now than pre-industrial levels temperature both over land and in the oceans is rising. Nature is giving us clear signs that it is responding to this change – ice and snow are melting faster than normal, sea level is rising slowly but steadily.

By adding more energy to the ocean-atmosphere system in which weather happens, we’re going to accelerate or amplify normal weather trends, so globally we can expect to see more powerful storms, droughts, heat waves and floods.

While no single weather event is indicative of climate change – say the recent flooding of the Zambezi River that displaced so many in Mozambique or Hurricane Katrina devastating New Orleans – these kinds of catastrophic events are increasingly showing signs that a shift in normal climate trends is happening.

Most importantly, the speed at which these changes are happening seems to be on the rise. If we continue to add heat, we’re going to accelerate the changes to global climate, it’s that simple. The dire threat, to us as a species in our comfortable industrial age, is that we might push the system into overdrive, bringing on irreversible and catastrophic climate change. It won’t be the end of the world, but it’ll be the end of the world as we know it.