They travelled by wagon over the Koue Bokkeveld by way of the Gydo Pass, built 40 years previously by Andrew Geddes Bain. Tafelberg was their first goal as it had never been climbed before. It was a cold, wet day when Mann and a local man named Viljoen discovered why.

They followed a steep route up the gulley behind the Spout column and into a water-worn, cavern-like chimney with polished walls about eight metres high. Ignoring the freezing weather, Mann discarded his boots and stockings and eased his way up the chimney.

Viljoen could not follow but a rope, hastily made from a belt, handkerchief and shoelaces, brought him barefoot, wet and very cold to the top of that enchanting mountain. His excitement was so great that he did not notice the cold until he discovered his right hand was completely numb - the thrill of conquering a peak can be overwhelmingly intense. 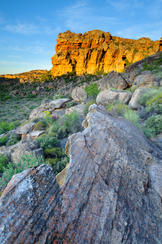 The next day the party climbed Sneeukop and found a beacon on the summit. In 1843 Astronomer Royal, Thomas Maclear, who erected the Maclear beacon on Table Mountain, Thomas Mann, Gother's father, and Wallich had set up a number of stations on Cape peaks to measure the arcs of the meridian, including the one on Sneeukop.

From Mann's diary it appears that nothing prevented these astronomers from establishing a station once a peak had been chosen and they suffered great discomfort and hardship in this pursuit. They covered most of the Cederberg range, often in icy winds and temperatures well below freezing, and proceeded over the eastern limit of the range to Wuppertal where they gratefully exchanged their worn-out shoes for the mission station's famous velskoene.

Two years later Thomas Mann was in the mountains near Riviersonderend when he wrote: 'Gales of wind from north with sleet, tent ropes thickly encrusted in ice four to five inches thick; wind furious, impossible to face.' Unlike his son, the astronomer did not go to the mountains for recreation, yet was a fine mountaineer who loved the places he visited.

The ascent of the smooth Tafelberg Spout by Frank Berrisford in 1924 opened the way for serious rock climbing in the Cederberg. Twelve years later J.M. Marcus led a frontal route up Groot Krakadouw, and in 1963 Jan Goedknegt and Binkie Kohler managed a strenuous G route up the Spout while the heavens poured down lightning, thunder and rain upon them.

They called it 'Thunder Crag'. The crux pitch had turned back a previous party and now Goedknegt was in trouble. 'My reserves of strength were rapidly diminishing. I had to do something, but quickly. I tried to climb down. I could not. Traversing was out of the question. All that was left was to go up. I tried, but soon retreated to my former uncomfortable situation.' 'I grew very scared. "I'm stuck," I gulped. "Well knock in a peg," came back up the cliff.

I looked around, but there wasn't a suitable crack for the type of pitons I had. I moved up onto the difficult rock again and immediately began to shake so much it felt as if I had contracted Parkinson's disease. Never before had I been so scared. I moved up, battling to find the next grip. Ah! there was one, but it sloped the wrong way. I groped around for some more but in vain. I was shaking more than ever as I desperately tried to reach the next grip.

I called on every muscle, even the strength of my involuntary organs, to send what power they had to my fingers which wanted to open, but which I kept closed by an effort of will. A few more movements and I would be up. I lay exhausted; my fingers closed uncontrollably, my body stopped shaking. After a few moments of bliss I realized how good it was to be alive. I wanted to tell the whole world what a wonderful day it was so I shouted down to Binkie, who replied: "What's so wonderful about it? I'm frozen stiff. Can I climb?"'

Another route was put up the Spout in 1962 by Mamacos and Baillie, again where others had failed. The climb was even harder than expected. 'After long and careful scrutiny the apparently smooth, marble-like rock began to assume suggestive shadows here and there, which turned into faint hollows and finally indicated a possible presence of holes.' Such is route finding. Climbers seem to thrive on adversity, and a year later Mike Scott was on the Spout in midwinter.

'The snow, which had begun to fall and clog our upward peering eyes, increased in intensity as we climbed a large block to the right of 'Thunder Crag'. The squelching sound of our socks inside our boots quite unnecessarily told us we had cold feet! When we looked up at the next section they got colder. A few pull-ups landed us in a two-man niche next to a block.

After a lengthy period had passed in erecting a belay to end all belays, the leader blew on his cold fingers, gripped his kneecaps to stop them wobbling, and climbed a sort of crack by pulling up hand-over-hand on small, uncut grips. Eventually a bulging face prevented upward progress.

'The perplexed leader, thinking that the only descent he could possibly attempt under the circumstances would probably give the second man quite a jolt, essayed a remarkably delicate traverse to the right around the bulge. Two thimble grips, into which only one fingertip at a time could be inserted, were sufficient to enable him to retain purchase on the rock.

After moving up, a mantle shelf onto a precarious ledge under a large overhang was accomplished by using an underhand grip in order to stand up. Two or three pitons were inserted at this juncture, for the next pitch required strenuous and alarming stretching.'

©Shem Compion
For the past two decades the Cederberg has been a great pioneering ground for rock climbers and an increasingly popular wilderness for hikers. A number of climbing routes in the Cederberg, namely at Krakadouw and Tafelberg, feature in Dave Cheesmond's booklet on 50 great climbs of the Cape.By David Bristow
©2022 South Africa Online (Pty) Ltd. SouthAfrica.co.za. All Rights Reserved.