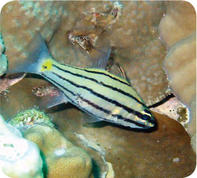 Cardinalfish can measure up to 20 cm in length.

Cardinalfish have compressed, elongated bodies and big eyes. Their two dorsal fins are separated and their mouths large and angled. They are colourful fish and are predominantly a reddish-golden colour.

Cardinalfish belong to the Apogonidae family which comprises of 22 genera and 207 species. They can be spotted in crevices or caves on the reef in pairs or small schools, and mostly feed nocturnally. This is one of the few species which broods orally, the male keeping the fertilised eggs in his mouth until they hatch. Their name derives from their reddish colour.

Cardinalfish feed on zooplankton, copepods, and small invertebrates such as shrimps and crabs.

They can be found in temperate and tropical oceans across the world, and at times in fresh water.