Things are changing in the Benguela system. Just as one group of scientists noticed that average temperatures have been rising over the South African countryside for the past four decades, most markedly in the west of the country, another group of scientists says that marine thermometers have captured a 1°C rise in sea surface temperatures around the coast since the World War II.

Further south, in the deep waters of the Southern Ocean, the mercury rose by an average 0.17°C between the 1950s and the 1980s. In fact, the latest Intergovernmental Panel on Climate Change (IPCC) study, the Fourth Assessment Report, which was released in three tranches in 2007, now estimates that something like 80 % of the heat which has been trapped in the system because of human-caused greenhouse gases, is now held in the ocean.

Since 1961 it has caused measurable increases in the temperature of the ocean, to as deep as 3000 m below the surface. During a climate change-related workshop held in Cape Town in May 2007, the Benguela Current Large Marine Ecosystem Programme (BCLMEP), an initiative between scientists from South African, Namibia and Angola, announced that “since 1955 the oceans’ net heat uptake has been 21 times that of the atmosphere”.

Not only is the ocean warming off the West Coast, but the rate of warming appears to have been accelerating during the past 15 years. There are also definite signs of change within the system – although the scientists will be the first to tell you that the exact cause of the change is still open to debate.

Amongst the first to go were the sardines, their numbers plummeting to a historic low along the traditional West Coast fishing grounds, the Cape Times reported in May 2006, possibly the result of shifting climatic changes or chronic over-harvesting. But meanwhile, in Mossel Bay, the sardine hauls were extraordinary, with Marine and Coastal Management reporting that the catch has “leapt up from 2 110 tons to 121 536 tons in five years”.

Marine birds followed, tracking the fish as they headed eastward, most notably the Cape gannet (Morus capensis). “In 1956, only seven percent of southern Africa’s gannet population occurred in the Eastern Cape. This number has jumped to 67%”, the BCLMEP reported in its newsletter in July 2006.

Anchovy shoals also seem to be disappearing from their traditional fishing grounds of the West Coast, but appear to have shifted eastwards, beyond Cape Agulhas. The West Coast rock lobster also appears to be shifting south and rounding Cape Point, tracking the coastline eastward and entering the already over-stressed abalone breeding grounds of False Bay. 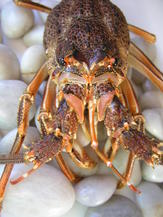 For the rock lobster, something is at play and it manifests as mass walkouts of these spiny creatures. During summer, when the water is loaded with nutrients, if the wind should pause long enough, the algae accumulates instead of being dispersed and blown out to sea. Once the plants' food is consumed, they die, sinking to the ocean bed.

As they decay, bacteria consume the oxygen in the water and without wind action to keep mixing in new, oxygen-rich water, life on the ocean floor begins to suffocate. If these low-oxygen events move close to the shore, they force the lobsters towards the shallows and into the intertidal zone. Once the tide heads back out, the lobsters are left for dead by the retreating waters.

Lobster walkouts are on the increase, possibly due to altered wind activity. During the 1990s, five mass walkouts occurred, leaving over 2 200 tons of lobster rotting on the shore. Three of these were the worst on record.