Why a Coat of Arms? 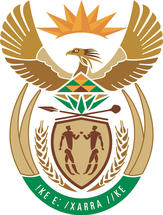 On 7 September 1993, the Multi-Party Negotiating Council of South Africa appointed a National Symbols Commission to begin the search for designs for South Africa’s new symbols, flag and anthem. They asked the South African general public to submit ideas, from these ideas along with the Cabinet, a brief was drafted. The Government Communication and Information System, GCIS, approached Design South Africa, an umbrella body which represents design agencies across South Africa, to brief the top ten designers. Three designers were chosen to present their concepts to the Cabinet. Mr Iaan Bekker's design was chosen for the new Coat of Arms. He is a director of the Foote, Cone & Belding Group.

The design of the Coat of Arms is made up of a group of elements arranged in symmetric egg-shapes placed on top of each other.
The lower egg-shape represents our foundation and is made up of several elements. The first one element is the motto - ‘!ke e:/xarra //ke’ – which mean ‘diverse people unite’. This is placed in a green semi-circle. Completing the semi-circle are two elephant tusks pointing upwards. Within this semi-circle are two ears of wheat, which frame a golden shield. The shield shape references a drum and placed inside this shape are two human figures, drawn in the way of Khoisan rock art.
Above the shield are a spear and knobkierie crossed in as a single unit. These elements form the lower oval-shape, the foundation.
Right above the foundation lies the oval shape of ascendance, whose base is formed by the King protea. The protea’s petals are in a triangular shape brings to mind the crafts of Africa.
Above the King protea is a secretary bird with the protea forming its breast. The secretary bird has uplifted wings, which completes the top oval shape of ascendance. The rising sun above the horizon is between the secretary birds wings, which completes the ascendance oval shape.
This combination of the two ovals intersecting creates an unbroken harmony between the elements resulting in a novel and elegant design.
©2020 South Africa Online (Pty) Ltd. SouthAfrica.co.za. All Rights Reserved.