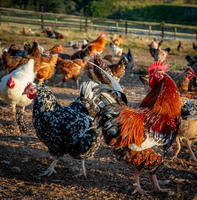 Dual purpose chicken breeds are suited for both egg and meat production. Many breeds fall into this category, including Black Australorps, New Hampshire's and White Leghorns.

Australorp chickens were developed in Australia in the 1900s through selective breeding of Black Orpington birds. The Australians, in effect, converted this British breed from a pure exhibition bird into a highly popular commercial one. The first Black Australorp chicken arrived in South Africa around the 1910s. South Africa has the distinction of developing all the colour varieties of the breed.

They are good meat birds, with mature roosters weighing 3,9 kg to 4,7 kg and hens weighing 3,7 kg to 4,5 kg. They are said to be hardy and exceptional egg layers, averaging about 250 good sized, pale brown eggs per year.

New Hampshire chickens were bred out of Rhode Island Reds and accepted as an independent breed in America in 1935. The first birds, according to the South African Show Poultry Organisation, arrived in South Africa in 1947.

The breed was selected for fast growth, quick maturation, early feathering and to produce large brown eggs. Mature roosters weigh about 3,5 kg, while the hens weigh about 2,6 kg. Some breeders claim the breed has better immunity and the ability to produce as many eggs as most commercial layers. The White Leghorn is one of the oldest chicken breeds known to humans.

They originated in Italy and were referred to as “Italians” until 1865, after which they were renamed Leghorns in America. The Leghorn in South Africa has evolved out of importations since the 1940s, from countries such as England, Denmark, Australia, New Zealand, the United States and Germany. The birds have been developed and bred over time to suit African conditions and requirements.

White Leghorns are traditionally used for egg production and still form one of the pillars of commercial layer breeds. The Roosters weigh about 3,5 kg when mature, while the hens weigh around 3 kg at this point.