Wild Coast: Hole in the Wall

Hole in the Wall, at the mouth of the Mpako River, is one of the most recognisable geological formations on Southern Africa's coast.

The huge rock formation, with cliffs that drop into the sea, has a hole clear through the middle. It's at its most dramatic when the seas are high and the Indian Ocean hurdles its waves through the hole in an incredible display of shattered water and crashing echoes.

The Place of Thunder 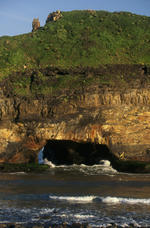 Like so many things in the colonized world, the place we know as the hole in the wall on the wild coast has had a perfectly good Xhosa name for centuries: it’s esiKhaleni, ‘the place of thunder’. The sound being referred to is that made when the Indian Ocean gushes through the cavity.

Silly people who try to swim through it invariably lose their lives, or other bits of themselves. The big rock island through which, in its time of spare, the Ezulwini River (although stream is more apt) has bored a tunnel is a whaleback of dolerite that has become separated from the mainland through coastal fracturing and erosion.

Dolerite is otherwise known as ironstone, and is formed by magma cooling and setting underground so you can appreciate just how dogged the forces of erosion are.

Hole in the Wall in Xhosa Mythology

In Xhosa mythology, the hole through the landmark island rock off the Wild Coast, just south of Coffee Bay, was made not by the working of nature but by mythological forces. There was once a beautiful maiden who lived in a village near the mouth of the Ezulwini River. A sea person living in estuary fell in love with her, and she with him.

This was much against wishes of her father, so the two lovers enlisted the help of a giant fish, which pounded the sea cliff in front of the river mouth until a hole was bashed through. They were thus able to escape out to sea.