The Sphinx and Crystal Falls 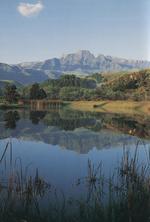 Route: Monk's Cowl EKZNW parking area to the first level of the Little Berg
Distance: 6 km
Duration: 2 1/2 hours
Grade: Easy
General: What does 'easy' mean, exactly, when hiking in the Berg? The fact that this walk is short in distance does not mean it's a walk around Zoo Lake. You will sweat, and it will seem a whole lot further than it really is, but that's mountains for you - they make you work for their pleasures. But this area, even the drive up the valley and past Champagne castle Hotel (look out for the potholes) on the way to the EKZNW station, reveals breathtaking scenes of Mdedelelo and the Dragon's Back.

Once on top of The Sphinx, if the weather plays along, you'll return home with photos that show you were among true warriors with their up-pointing spears.

Start off from the EKZNW car park, heading past and up behind the office diagonally to the left (south-east), following the Sterkspruit/Mpofana upstream. About 500 m from the office there is a direction sign where you head off to the left. After another 500 m you come to a T-junction where you must head to the right and up some steep zigzagging steps where you should keep strictly to the path to avoid erosion. You might find the local inhabitants selling walking sticks here. This is a heavily used path and so highly susceptible to degradation. Try not to step on the wooden erosion barriers, but over them, as continual tramping destroys them.

A fence at the top of the zigzags channels people on the right track. There are some kraals above the right-hand side of the path. Here the path heads around to the right (south and west), as it makes its way onto the lower section of The Sphinx - the obvious headland. Where you cross the second tributary of the Mpofana you'll find Crystal Falls in a small shady cove; but this is barely 2 km from the start and so hardly even qualifies as a hike. For children, however, this would be a good place for a rest before tackling The Sphinx.

The path first contours right under the large, pitted, head-shaped sandstone bulge and then loops and zigzags through the sandstone band, weathered into interesting shapes and colours. At the top of The Sphinx - a steep 1-km pull up onto the Little Berg - slip off your pack and enjoy the views among the rocks and silver-leafed protea bushes.

Here the path swings to the right and you reach Breakfast Stream just a short stroll from the top of The Sphinx. If this is as far as you plan to go, then you'll have plenty of time to walk around and find great angles for photographs, using the proteas or other plants as foreground detail.

For inspiration, try to find a copy of Malcolm Pearse's Camera in Quathlamba to see what can be done with a well composed picture in the Little Berg (maybe even consider using black-and-white film and contrasting light of early morning or afternoon when the main peaks are backlit, for some dramatic shots).