The Shape of the Kruger National Park

Although the Kruger Park is famously the same size as Israel or Wales, it is still not big enough. More specifically, it is the wrong shape. Before the invasion of modern civilisation, the game in the Lowveld migrated with the seasons, from the coastal plains in the east to the mountain foothills in the west.

The Kruger National Park, however, runs from north to south and its width is quite narrow (averaging only 50 km). As a consequence, the plants are overgrazed, species are overpopulated and water is often in short supply.

The reason for this misalignment is that the orientation of the Kruger National Park corresponds to the old tsetse fly belt, which made the area unsuitable for domestic animals and human habitation. In fact, it was the threat of nagana (the tsetse-borne disease) that made the proclamation of the game reserve viable in the first place. 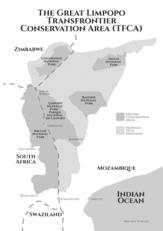 So, to fully restore the ecosystem of the Lowveld, the Kruger National Park must expand laterally to give the animals freedom to re-establish their old migration routes. Happily, there are big plans to extend the reserve in the north, east, and west, and Kruger has already been united with the Limpopo National Park in Mozambique as part of a bigger Transfrontier Conservation Area.

Altogether, it is hoped to grow the size of the greater Kruger National Park protected area from around 2 million hectares to over 10 million! This will make it one of the largest unbroken conservation areas on the planet, and a site truly worthy of the United Nations Educational, Scientific and Cultural Organisation (UNESCO).