Red Tides and the Rock Lobster

From Water to Land 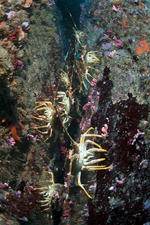 ©Jean Tresfon
In April 1997, as if in some kind of cultish suicide pact, the rock lobsters of Eland's Bay, just north of Saldanha, abandoned their watery home and marched up onto the beaches as one.
There lay 1 700 tons of lobster stranded on the sand, their tail-flapping and creepy-crawling becoming feebler by the hour as the sun rose above them and baked them in their shells.
In less than a day of leaving the sea, they turned black, fetid and highly toxic.

As it so happens, the blame, in this case, lies squarely with the offshore winds. After a full season of harassing the coast and drawing up the cold water from the bottom of the ocean like mercury to a magnet, they began to falter towards the close of summer. It happens like this, where a pulse in the wind proves catastrophic.
The water is loaded up with nutrients; the phytoplankton grows as if they are on speed; but a pause in the south-easter means they are not blown out to sea. The algae multiply as if it were their last day alive, turning the water sludgy with excess bloom. Soon the tide turns rusty red, bleeding toxins into the water that may poison some creatures and even prove lethal to people.
If the cross-shore currents conspire to sweep this notorious poisoned red tide closer to shore, the Jabberwocks are doomed. As the plants run their course and deplete the available nutrients in the water, the algae die and sink down through the water to the ocean floor. Here bacteria begin their work on breaking down the algae to enable it to continue on its way through the nutrient cycle. But this decaying process gobbles up the available oxygen in the water. Without the usual wind action to churn up the sea and keep it oxygenated all the way down through the water column, life on the ocean floor begins to suffocate.

©Jean Tresfon
Bronze whaler swimming in a red tide.
Lobsters, breathing through their gills, are extremely sensitive to low-oxygen events. As this oxygen-deficient water is swept in from deeper waters, they move shoreward to escape it - up into the shallows of the inter-tidal zone. The closer the low oxygen water intrudes into these bays and shallows, the more it draws the lobsters towards their impending demise. If the event is mild, it will only stress the creatures captured in the low oxygen pockets, inhibiting their growth rate and stifling reproduction. But a bad event will drive the lobsters shoreward. The Jabberwocks will follow the tide as far as it will take them, but once the water retreats, the creatures are left stranded between suffocation by water or suffocation by air. It's not only lobsters caught up by this swirling, invisible death: swimming crabs, cuttlefish, squid and octopus, mussels, sea snails and deep-water fish all succumb to loss of oxygen.