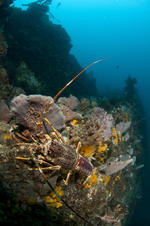 ©Jean Tresfon
Five mass walkouts occurred during the 1990s, bringing 2 263 tons of lobster out of the sea. Three of these events were the worst ever recorded in South Africa. In the most extreme cases, once all the oxygen has been depleted, the bacteria in the ocean are left to work in an anaerobic environment.
The consequence is that they start churning out hydrogen sulphide, which bubbles its poisonous gas up through the water, tainting it once more. The result can be catastrophic.
Entire bays have been sterilised by this acid - seaweed, shellfish, fish, lobsters; you name it, they die. All that remains is the noxious smell of rotten eggs and a sterile bay. Life here will eventually recover, but in its own measured time. Lobster walkouts and red tide events have been on the increase in recent years.

Various other things have also been changing in the ocean. The deep waters of the Southern Ocean are warming - by as much as 0.17°C between the 1950s and the 1980s, and the sea surface temperatures around southern Africa have climbed by about 0.25°C per decade for the past 40 years or 1°C since World War Two. Dr Barry Clark, one of the few marine specialists in South Africa to have pondered the fate of marine life in a changing climate, comments that while the global circulation models predict an increase in air temperature of 1°C to 3°C over the region, there is less confidence when it comes to predicting changes in sea surface temperature. It is understood, though, that this will lag behind air temperature by about 20 years.
It seems that an increase in the intensity of upwelling is occurring in many of the world's 'upwelling centres', including along South Africa's West Coast. Currently, the most accepted explanation for this event suggests that night-time cooling is being stalled by the increase in greenhouse gases in the atmosphere. This causes daytime heating of the land to increase, leading to a greater difference in the pressure gradients between the sea and the land. This gears up the offshore winds a notch or two, which speeds up the upwelling process.

©Jean Tresfon
A shoal of anchovies, Hout Bay.
If the increased upwelling in the ocean is followed by late season pulses in the winds - as is anticipated - then low oxygen events can be expected to increase. This means more lobster walkouts, more death of life down below, and a dearth of some of your favourite deep-water fish for dinner. Increasing frequency and intensity of red tide blooms and low oxygen events along our West Coast are a sure thing.
But the low oxygen events are only expected to occur when the wind slacks off. Surely, for the rest of the season, the increased productivity of the algal bloom will mean greater food for the system - more zooplankton, more fish? Surely this is the answer to the demise of fisheries globally? Not likely. Like so many things in nature, near-surface fish such as anchovies and sardines need just the right conditions in order for their youngsters to thrive. Of course, if the offshore wind is too weak, there won't be sufficient upwelling to ensure a plentiful supply of food and the fish larvae will struggle to survive. Weaker air movement also means that the water will not be churned well enough to bring the food and larvae into contact with one another.

©Roger de la Harpe
Waves breaking in high winds, Cape Town.
A strong wind, however, can be equally damning to the next generation of fish as it will blow the spawn far out to sea and away from their food source. Higher winds will also churn up the water too much, breaking up the pockets of food on which the fish larvae must feed and dispersing them widely. Or they will mix up the water so much that the phytoplankton will be driven too deep, where deprived of sunlight, they will not be able to photosynthesise. The larvae also find it difficult to catch their prey if their world is churning around them like soapy water in a washing machine.
So, like every good story of nature, the wind must be just strong enough but not too strong. For fisheries off our West Coast, that's estimated to be about 9 to 11 knots (or 18 to 21 kilometres per hour). Wind stress is projected to increase over southern Africa, with the consequent greater possibility of harmful algal blooms. Combined with changes in other phenomena, this 'may further complicate an already unclear picture'. Wind stress is certainly expected to disrupt the spawning process of near-surface fish in the area.
While some larger species such as sardines may be better equipped by virtue of their size to migrate to more suitable areas, smaller fish such as anchovies may be better able to adapt to environmental change by remaining in the same area. Either way, it's yet another environmental change whose outcome we have little control over. And, if you think you wilt in heat waves, you can be grateful you are not a fish.