Management Challenges of the Kruger Park

One of the first attempts to manage the natural environment of the Kruger National Park was instituted in the early 1930s. The problem was that, at the end of the dry season, the park was virtually without water.

The few remaining pools, therefore, attracted a huge amount of game, which resulted in the destruction of all the grass and trees in the vicinity. To remedy this, Stevenson-Hamilton wanted to sink boreholes in the arid stretches of the park, which would encourage game to spread out and graze more evenly.

In 1933, James Stevenson-Hamilton chatted with a regular visitor, Mr Jearey, about the issue. Jearey offered to start a fundraising campaign where members of the public could contribute to the construction of dams and boreholes in the Kruger National Park. The first appeal went out in The Star newspaper in Johannesburg and the response was enthusiastic.

©Nigel Dennis
Giraffe herd and Impala at a waterhole in the Kruger National Park.

Within a few months, thousands of pounds had been raised and around 14 successful boreholes were sunk at various points in the park. The fundraising campaign continued for many years, operating under the inspirational banner, ‘Water for Game’. Subsequently, hundreds of windmills, reservoirs, drinking troughs and dams were built.

Many of these were named after particularly generous benefactors, and several watering holes still have small plaques on the roadside which identify the relevant contributors. Today, however, some of the reservoirs are getting decommissioned because they are considered overly invasive.

Game In, Humans Out 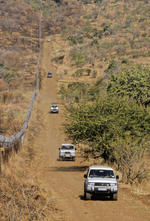 The next big management challenge was to throw a fence around the entire game reserve. This needed to be done for two reasons: to keep the game in and to keep the humans out. But it was an enormous task, and one which would require a great deal of money. So, it remained a “nice-to-have” thought for many years.

In 1958, however, there was a severe outbreak of foot-and-mouth disease in the park. The state veterinary department was alarmed and wanted to erect a fence along the park’s borders to prevent the infected wildlife from transferring the disease to domestic animals on nearby farms. The government duly issued a substantial grant for the construction of the 720 km fence, which was completed in 1961.

Adjusting to the Barrier 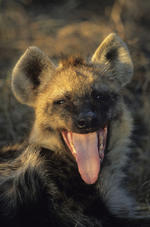 At first, the game resisted the man-made barrier as it cut them off from their traditional seasonal migrations, which ran from east to west rather than north to south.

After a number of years, however, the adaptable animals learnt that some things can’t be overcome and changed their browsing patterns.

At this time, most of the rest camps were still largely unfenced, apart from basic screens and thorn barricades. This must have made things quite exciting for the visitors who had to keep an eye out for hungry carnivores.

In 1966, however, a couple of tourists were badly bitten by hyenas and animal-proof fences were quickly erected around all the rest camps.