©Zandraai Boerdery
One of the oldest sheep breeds in South Africa, the Damara is a fat-tail breed suitable for farming in harsh and dry conditions.

Indigenous sheep breeds of South Africa are mostly animals well-adapted to extreme climates such as arid hot areas and are often of slender built with fat tails, used for meat production. Fat is stored here and used for energy in times of limited grazing.

Of the indigenous sheep in South Africa, the Damara is most used as a commercial sheep, but there are also farmers in the Limpopo province that use the BaPedi for commercial meat production. Indigenous sheep is best suited to extensive farming (veld grazing) systems.

The Damara sheep is a large animal originally from Namibia. It has a long and narrow fat tail and short hair, but develops a woolly undercoat that is shed in summer. Colouring can be brown, white, black or multi-coloured. Both rams and ewes have spiralled horns.

The Damara is resistant to both internal and external parasites as well as sheep sickness and can utilise both shrubland and, unlike other sheep breeds, also leaves.

First lambing is between 12 and 15 months with lambing intervals of seven to eight months. Lambs are small; less birthing complications often associated with larger lambs. Damara ewes are excellent mothers.

A slaughter weight of 18 kg will be reached in about seven months. Damara meat is lean with a fine texture and is not streaked with fat; the fat on the carcass is only 1 mm to 2 mm thick.

In a study comparing the leather quality of nine sheep breeds, the leather from Damara sheep was found to be superior in strength, with a very fine grain with superior strength. The Damara Breed Breeders Society of South Africa was established in 1992.

©Greta Snyman
The endangered Namaqua Afrikaner sheep can store more than 30% of its weight in the form of fat in its tail.

The Namaqua Afrikaner sheep is a hardy breed, believed to have descended from the Hottentot people who lived in pre-colonial South Africa. The Namaqua Afrikaner is now one of South Africa’s most vulnerable and endangered sheep breeds, part of a conservation programme at the Northern Cape Department of Agriculture’s Carnarvon Experimental station. Surplus animals from the conservation breeding programs are sold to farmers.

The Namaqua Afrikaner has long legs, a narrow body and a long fat tail where up to 38% of its body weight can be stored. It has a smooth, white-haired coat, highly suitable for light leather products such as gloves. Animals may have red or black heads. Both rams and ewes have horns. The Namaqua Afrikaner is a late-maturing breed; its first lambing is at 16.5 months and thereafter follows an 8 to 9-month lambing cycle.

The ‘Ronderib’ in the name of this large fat-tailed sheep refers to this breed’s oval-shaped ribs. An ancient breed, the Ronderib Afrikaner sheep is believed to have originated in the Middle East and Northeast Africa. In South Africa, it has adapted to the dry desert conditions of the Northern Cape province.

Its long thin legs serve the animal well when it needs to walk vast distances in search of grazing and water and its huge round tail stores 2 - 3 kg of fat as energy storage during droughts.

First lambing can be as early as 8 months. Lambs grow slow and are marketed at 10 - 12 months. As their carcasses tend to be lean and small, the ‘Ronderib’ is often used as an additional breed in sheep farming. In addition, Ronderib rams are used as teaser rams to prepare ewes for mating.

The substantial tail fat is often sold separately from the meat and used in the preparation of boerewors and droëwors (droëwors is a preserved meat product of finely minced meat and fat mixed with salt and spices and then dried). The breed is covered with a light cream fleece of wool with smooth, glossy hair, used for the manufacture of blankets. The skin is highly prized for fine leather goods. 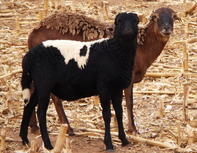 ©Peter Oosthuizen
The indigenous Zulu sheep is a Nguni-type sheep with tiny ears and is adapted to humid conditions.

The Zulu sheep belongs to the Nguni type of sheep. The Nguni-type has a broad ancestral gene pool making it well adapted to harsh environmental conditions found in parts of KwaZulu-Natal. Characteristically it is resistant to tick-borne disease, they are quite drought and heat tolerant and are successful in marginal communal grazing conditions.

They are multi-coloured with a medium fat-tail and they are commonly farmed and traded by communal farmers. Small ears are common in the breed with some sheep that display ears that are short (‘mouse ears’ or swelamadlebe” - those with no ears), but these are only occasionally observed in the flocks due to a recessive gene.

Genetic purity is threatened due to crossbreeding with exotic breeds to improve carcass mass and mutton production. Studies done in 1995 estimated that only 3 000 pure Nguni sheep were left in South Africa.

©Keith Ramsay
A good example of an indigenous BaPedi ram.

The BaPedi sheep is an ancient breed believed to have migrated south into the Limpopo province a few centuries A.D. It is in this province where most BaPedi sheep are still found.

Another Nguni-type sheep, the BaPedi is fat-tailed sheep with white, brown and red hair, a small framed and long legs. It is said that this breed is immune to the viral disease, blue tongue as well as redwater and heartwater due to its resistant to ticks.

The BaPedi is an early maturing breed. It has high reproductive rates, e.g. two lambings per year with six-month intervals, with their first lambing at 11 months. BaPedi ewes can remain productive up to eight years of age. It takes 12 months for ram lambs and 14 months for ewes to reach an ideal slaughter weight of 30 kg (18 kg of meat).