The Five Waterfalls of Howick

The Howick Falls are visited by thousands of tourists every year. The Falls are approx. 95 m high and almost at the centre of the town. The town started around the Umgeni River and Howick Falls in the 19th century as a place where travellers can rest and water their animals while travelling between the Natal inland and coast.

Since then the town of Howick has grown to house over 14 000 inhabitants. Near the falls are a caravan park and tea-room for those who want to relax around the original outspan site or enjoy the picturesque waterfall. Around the rest of the town is fine walking and driving country to explore. The road from Howick to Rietvlei on the Craigieburn Dam is a lovely drive and provides access to four other waterfalls. These are the Cascade Falls, Shelter Falls, Karkloof Falls, and Woodhouse Falls. 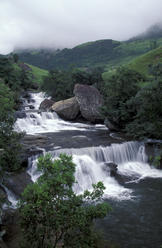 This game farm, which set the society back almost a quarter of a million Rand, was converted into a successful environmental education project. The project has reached over 100 000 people, most of them children. The visitors to the farm have access to camps, experienced educators, walks and programmes aimed at developing an ecological conscience within each individual by exposing them to unspoilt, undisturbed nature.

There is also a Howick Tour trail that takes visitors to several historic buildings in the area. The Gobongo tributary forms the Cascade and Shelter Falls. The Cascade Fall is 25 m of fine whitewater with a swimming pool at its foot. The Shelter Fall can be found at the head of a secluded ravine and is 37 m high. A path can be followed to get to its foot. In 1897 a young girl named Mary Fynn fell while attempting to climb the rock face next to Shelter.

When she disappeared into the pool at the waterfall’s base a man named Alfred Kinsey dived in after her in the hopes of saving the 17-year-old. Both drowned, their graves now side by side in the Howick English churchyard.

Drive further along the road towards Rietvlei and you’ll get to the view site of Karkloof Falls. This waterfall is 105 m high. It is the tallest of the five Howick waterfalls, even taller than the famed Howick Falls. Karkloof is on Mlambomunye, the tributary of the Umgeni River. The waterfall got its name from an overturned cart that was abandoned there in 1845. The wreck served as a landmark on the roadside for many years after. Visitors can picnic around the waterfall.

The final and smallest of the Howick waterfalls is Woodhouse Fall. It’s only 10 m high. The waterfall is named after the farmer, William Woodhouse. Sometime in the 1880’s, Woodhouse was crossing the river just above the waterfall when his horse tripped, throwing him into the water. The horse managed to scramble out, but Woodhouse was carried over the waterfall and his body was later found in the pool below.

The earliest attempt of a man to fly in Southern Africa took place in this area. In the early 1870’s, this area was home to a man named John Goodman Household. He would roam the hills, observing the birds as they flew over the valleys, envying the excitement of flying. One day he shot a vulture to measure its wingspan in proportion to its weight. Using these measurements he designed a glider of bamboo, steel tubes, oiled silk and paper.

On the other side, the glider crashed into a treetop, catapulting Goodman Household into a pool of water. He broke his leg and the glider was wrecked. His family never allowed him to fly again and the broken glider was thrown away.