The Treatment Action Campaign (TAC) is a South African HIV/AIDS activism organisation founded in 1998. It is widely known as one of the most important civil society organisations active on AIDS in the developing world today.

The organisation was established by political and social activist Zackie Achmat, who was a youth during the apartheid years and participated in numerous demonstrations that led to jail time.

Achmat joined the African National Congress (ANC) in 1980 and founded TAC after he was diagnosed with HIV to promote the importance of HIV/Aids awareness and to urge the government to make antiretrovirals accessible to all HIV-positive South Africans. 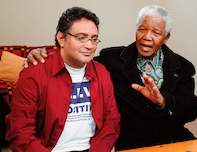 In the 2000’s, when South Africa was facing an extremely high level of HIV/AIDS cases, TAC sued the government for a lack of mother-to-child-transmission (MTCT) prevention. They won this case due to the South African constitutional guarantee of the right to health care, and the government was ordered to provide MTCT programs in public clinics.

Furthermore, TAC argued that then-president Thabo Mbeki was denying the Aids epidemic and needed to make anti-retroviral drugs accessible to citizens who could not afford them. Achmat famously refused to take his medication until the government ensured that all South Africans could obtain them.

After the government refused to allow antiretrovirals to be readily available, TAC organised a number of campaigns and rallies to advocate for universal access to AIDS treatment through the public health system.

The organisation led several civil disobedience marches in 2003 that they halted after government officials promised that a treatment plan would be forthcoming.

During the following years, TAC was instrumental in securing a universal government-provided AIDS treatment programme. TAC played a large part in the adoption of the National Strategic Plan on HIV, STIs and Tuberculosis 2007-2011 by Parliament.

©Eric Miller
Khayelitsha 29 April 2004 Celebrating 1000 people on the ARV programme, a drama production in the issue of HIV by a group of young schoolboys.

Today, TAC plays a vital role in representing users of the public healthcare system in South Africa. They campaign for quality healthcare and its members are trained in the basic science of HIV, TB and related conditions, and about their rights in the healthcare system. The organisation has over 8,000 members and 182 branches and provincial offices in seven of South Africa’s nine provinces.