The Hex River Valley is the oldest and largest growing region and is indeed the traditional home of South African table grapes. The economy of the area is based almost entirely on the production of table grapes for the export market.

Table grapes have been cultivated in the valley for over 100 years, and, here too, are many family farms where table grapes have been produced for generations. Some decades ago the Hex River region produced more than 50% of South African table grapes. In the interim the good returns earned from table grape exports have encouraged the development of earlier table grape production regions in warmer climates, the biggest of which is along the Orange River near Upington. 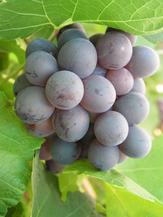 The table grape industry developed in the valley and one of the most successful varieties produced in the valley was the black seeded grape Barlinka which was discovered by Professor Izak Perold, the first professor of Viticulture and Oenology at Stellenbosch University, in Algeria in 1910. The production of popular seeded varieties such as Barlinka, Alphonse Lavalleé, Almeria and Waltham Cross continued in the valley for decades.

Today the most successful and popular variety produced in the valet is Crimson Seedless, introduced from the USA. Today, through the determined efforts of local and international breeders and intellectual property companies, as well as growers and exporters who are committed to providing their customers with a premium product, the introduction of new and improved table grape varieties keeps the industry at the forefront of technological advancement and international competitiveness. 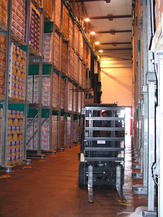 ©Louise Brodie
Cold storage unit in Hex River Valley.
Hexkoel cold storage facility at Orchard is a massive co-operative cold storage facility, one of the largest of its kind internationally. This cooperative facility cools and dispatches around 18 million cartons of table grapes produced in the area annually during the grape season between December and April.By Louise Brodie
©2022 South Africa Online (Pty) Ltd. SouthAfrica.co.za. All Rights Reserved.