The entrance to the Hex River Valley by train is remarkable, specifically from an engineering perspective. The Hexton Railway Route through the mountains from Kleinstraat Station in the north to De Doorns Station in the valley consists of four tunnels, three passing loops and a road-over-rail bridge.

Of the 30 kilometres of track, 16.8 kilometres are underground! This remarkable feat of engineering was completed in 1989 and the four tunnel system includes the longest railway tunnel in Africa. The stretch of railway between the Hex River Valley and the Little Karoo Plateau above the Hex River Pass has an interesting history that has influenced all railways in Southern Africa.

In the 1870’s this stretch presented a major obstacle during the construction of the railway between Cape Town and the diamond fields at Kimberley in the Northern Cape. The very steep gradients that had to be traversed only allowed for the use of a very narrow gauge (distance between the tracks) of 3 ft 6 in (1,067 mm) over the pass.

After initially making use of dual gauge, it was eventually decided to convert all existing railway tracks in the Cape Colony to this narrower gauge that was eventually to become known worldwide as Cape Gauge. The fact that most of the present day railway lines in Africa are Cape Gauge can, therefore, be directly attributed to the Hex River rail pass. When the new Hexton Railway Route was opened, the old pass and Osplaas station became redundant and this is the route used today by the Hexpas Express.

Along the current railway route, the De Doorns station is the northernmost station in the valley and is situated in the town of De Doorns. This means the thorns and refers to the Acacia Karoo thorn trees which originally grew very abundantly in the valley. This changed rapidly in the late Victorian era when farmers in the valley started producing brandy. This was a successful way to reduce their produce to the smallest possible bulk in order to transport it by cart across the mountains to Wellington.

The brandy distillation process required large quantities of firewood and this, unfortunately, led to the depletion of virtually all the valley’s Acacia Karoo trees. This industry created prosperity in the valley at the end of the nineteenth century, and a number of “Brandy Palaces” were built. To this point homestead architecture had largely been according to the Cape Dutch style such as seen at the gracious De Vlei Country Inn near De Doorns.

This prosperous era saw the introduction of homesteads built in the Late Victorian Art Nouveau style. A splendid example of this is Arbeid Adelt Manor, a beautifully restored homestead built lavishly in this distinctive style.

Travelling north east from Sandhills the next station along the route is Hex River Station. One of the original farms in the area was called Vendutie Kraal which means auction corral. This was the site of livestock auctions and the buyers were usually travellers trekking through the valley to the interior of the country. The wagon road also crossed the river again at Hex River. Hex River Station shares its name with the valley and the name is popularly attributed to the legend of the Hex of Hex River Valley. The name “Hex”, is the Dutch/Afrikaans word for witch.

The legend is based on a true story from the early days of the valley’s settlement. It is about the beautiful young Eliza Meiring, who challenged her suitors to climb to the heights of Matroosberg peak behind her parents’ home, saying that she would marry the one who brought her a rare Disa orchid from its treacherous heights. Her favourite suitor slipped and fell to his death and Eliza was racked with guilt and grief by this tragedy. Her mourning was so intense that she lost her mind and had to be confined to her home as all she wanted to do was head into the mountains to look for him.

One day she tried to escape from an upper floor window but fell head first and was killed. From this sad story, the legend grew and it is said that at full moon Eliza’s spirit can be found wondering the mountain slopes of the Matroosberg, searching for her lost love. 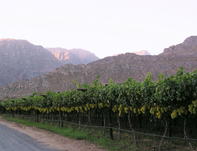 The station between Hex River and De Doorns is known as Orchard Station. This station was named and constructed by the Cape Orchard Company in the late 19th Century. New technology, available infrastructure and a visionary pioneer named Leicester Maguire Dicey started international fruit exports from Orchard and thus some of the earliest origins of an international industry worth billions today were founded on this site.

Cold storage ship transport was in its early stages of development and the railway through the Hex Valley had recently been completed. This presented the possibility of producing fruit in South Africa for export to the UK. International fruit shipments were in an early, experimental phase and Dicey recognised the possibility that this offered.

Dicey, his brother-in-law Malleson and a cousin of Dicey’s founded the Cape Orchard Company with this as the company’s objective. The company bought the farm De Modderdrift at what is today Orchard. Here the company produced apples, pears and peaches for shipment to London.

This pioneering venture was a great success, producing many firsts in horticultural and transport technology. It was also one of the first pioneering fruit exporting ventures that initiated the start of the Western Cape and indeed South African fruit industry. During the past 60 years, the orchards around Orchard Station have been replaced by more profitable table grape vineyards.

Orchard is also the site of the Hexkoel cold storage facility. This massive co-operative cold storage facility is one of the largest of its kind internationally, cooling and dispatching around 16 million cartons of table grapes produced in the area during the grape season between December and April. The Hex River Valley is the oldest and one of the largest table grape production regions in South Africa.

Table grapes have been cultivated in the valley and exported for over 100 years and the economy of the area is based almost entirely on the production of table grapes for the export market. The striking autumn colours produced by the vine leaves during May and June with the backdrop of snow-covered peaks make the Hex River Valley a favourite destination for photographers during this season.