Quarter Mile Reef is located just outside Sodwana bay. This is where the pregnant ragged-tooth sharks spend their time from December to March, before leaving for Aliwal Shoal.

Ragged-tooth sharks are a big attraction for scuba divers and aren’t nearly as aggressive as they look. Quarter Mile Reef has huge rocky boulders scatter on the ocean ﬂoor. There are various large sandy patches in and around the reef, and as a result, this reef can only be dived on days when the sea is ﬂat and there is no strong current or surge.

Angelﬁsh, kingﬁsh, red snappers, goldies and the regular reef ﬁsh found in tropical waters are also to be seen here. In some of the overhangs and small caves you will ﬁnd cleaner shrimps busy in the cleaning station. Majestic green turtles also frequent the area.

This reef has overhangs, gullies, ledges and a cave big enough to swim through. The reef also has big sand patches between parts of the reef and has a large quantity of ﬁsh life, allowing divers to swim through schools of fusiliers, snappers, and in particular, knifejaws standing guard in the opening of the cave.

Various ﬁsh species are found in the area which includes sea goldies, sea breams, damselfish, and royal angelﬁsh. On the outside of the cave is the most beautiful coral life in pastel colours, from peach fleshy coral to yellow sponges, whip coral and everything in between. The hard coral consists of table coral, staghorn coral, plate coral and spiky coral. Various species of nudibranchs in different sizes and colours are regularly seen on the reef.

This reef only has a few small rock formations, but it is covered with the most beautiful coral. The reef is mostly ﬂat with small sand patches. There is an extensive variety of small marine life on this reef, including schools of spadeﬁsh, old-woman angelﬁsh, snappers, nudibranchs, coachmen and fire gobies standing guard in front of their tiny caves. 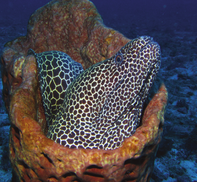 Pinnacles consists of large underwater rock formations with the pinnacle itself only six metres from the surface of the water. There are also lots of gullies and boulders in this area which are surrounded by sand patches. A variety of hard and soft coral is found on this reef, but in some shallower parts of the reef, some broken coral is found.

Four Buoy is situated next to Pinnacles on 2-Mile Reef with boulders and gullies surrounded by huge sand patches.

Four Buoy is almost the central point of 2-Mile Reef. A variety of hard and soft coral is found here with smaller ﬁsh species found between the coral and in small crevices. A great array of tropical reef ﬁsh, as well as potato bass, nudibranchs and various clamshells, are seen regularly. 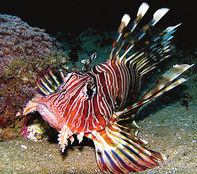 If coral is what interests you, then this is the dive to do. The reef is ﬂat, but thousands of spectacular coloured hard and soft corals are to be seen with a variety of juvenile ﬁsh, including wrasse, butterﬂy, angel, surgeon and lion ﬁsh hiding in and under the coral. This is a relaxing, scenic dive for all levels of divers.

This popular dive site consists of big, blocky boulders covered in coral with sandy patches in between. The excellent light penetration and shallow depth have created a beautiful underwater garden with a magniﬁcent range of coral and invertebrate life.

The marine life encountered on this reef includes potato bass, scorpionﬁsh, shrimps, eels and rays. Short-spine pufferﬁsh, as well as flounders, have also been spotted here. The coral life includes various types of hard and soft corals, sponges and anemones. Tiger cowries and other shells add to the beauty of this reef.

This is one of the best dives in Sodwana. On this reef, one usually ﬁnds various gullies, a long swim-through and boulders surrounded by sand patches.

Numerous varieties of coral such as fleshy soft coral, table and spiral coral, as well as colourful sponges, are a feature of the area. Arrays of reef ﬁsh, like titan triggerfish, are found on Anton’s Reef with cleaning stations in the caves and under the overhangs. Various rays and eels are also found regularly.

This is a dive at a mostly untouched reef where you will ﬁnd marine life that isn’t commonly seen elsewhere. The area is quite ﬂat but still has some caves and overhangs.

Guitar sharks are spotted in this area amongst tropical reef ﬁsh. Round ribbontail rays and tropical ﬂounders are also seen on the sand patches between the coral reefs. Divers will encounter different kinds of nudibranchs and peacock mantis shrimps.

The reef is divided into two parts by a large sandy patch, and when the visibility is good, you can see the one part from the other. The one is a large, rounded reef with scattered rock surrounding it and the other a smaller, rounded reef with steep drop-offs on the one side and quite a few ledges and caves on the other side.