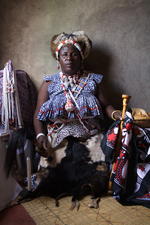 For a rural community such as Ga-Selala, good, clean water is essential to staying fit, healthy and even well fed. Dirty or stale water can harbour bacteria, viruses or parasites that cause diarrhoea. The cholera-causing bacterium is associated with poor sanitation (the best homes have pit latrines in the yard).

The more water-stressed an area, the more likely water-borne illnesses are to occur, which undermines a family's health and its ability to earn an income or tend a food garden. If the food garden is unattended, or if there's no water to keep it thriving, the family's nutrition drops, along with individuals' resistance to disease.

Add in HIV / Aids, what Selina calls "the drastic disease", and susceptibility to illness increases.

Dr Gina Ziervogel, research fellow with the Oxford wing of the Stockholm Environment Institute (SEI) and the University of Cape Town's Climate Systems Analysis Group (CSAG), and SEI colleague Dr Takeshi Takama, have spent the past two years gathering stories from within the Ga-Selala community in order to better understand how these multiple levels of stress feed back into each other, undermining the health and prosperity of this marginal, rural village.

The idea, Ziervogel explains, is to understand how water and health stresses might be impacted by changing climatic trends.

If temperature increases, it will have implications for water supply. Climate change has a direct effect on the water table and how much it recharges. A hotter world, where conditions are drier, will put more pressure on existing water supplies. Although rainfall may increase during summertime in this part of the country, according to the climate models, it is not expected to result in even distribution of more rain.

This might limit how water percolates down through the soils to the bedrock, recharging the groundwater which feeds the wells or is pumped up to the dam above Ga-Selala. More ferocious summer storms could lead to heavier rains, with more water rushing off the surface.

Traffic - both human and hoofed - has worn away most of the ground cover here, exposing the orange earth to the scouring hand of wind and rain. Where the ground is not scrubbed smooth, it is seamed with occasional erosion dongas. Heavy storms will only strip away more of this exposed soil.

Now the double-edged sword: mining. Ga-Selala at least benefits from being close to a main road, which allows some villagers to slip quietly into the fringe of the mainstream economy: mining, and the many industries that are growing up around the mines, such as domestic work, catering, construction and accommodation.

The rocks and soils throughout the Sekhukhune municipal area in which Ga-Selala occurs are rich in heavy metals. Some mines have been open since the 1920s, but now the need for platinum, chrome, titanium, vanadium, andalusite, silica and magnetite is fuelling a mining boom. Burgersfort, according to the regional municipality, is one of the fastest-growing towns in the country.

Ironically, though, the prosperity which the municipality claims is coming to the region is not reaching every village equally. Mining means jobs and income for otherwise impoverished communities… but it also means extracting vast quantities of an already over-stretched water supply.

More mines are expected to begin sinking their claims into the bedrock here. In an increasingly water-stressed environment, water managers will have to weigh up the benefits of mining jobs versus basic water demands of the people who most need the jobs which the mines will provide.

One November afternoon in 2007, while a cohort of SEI researchers picked their way up through Ga-Selala to seek an audience with the sangoma, the elements revealed themselves with all the typical drama of the highveld.

A furious wind tore down across the plain, whipping the exposed ground up into a translucent orange cloud that nearly obscured the nearby villages and mountains from view. Then it paused, as if for thought, to allow the thunder to roll through.

Lightning began slicing its way across the sky, moving in closer until javelins of brilliant electricity hurtled down onto the koppies above Ga-Selala, accompanied by magnificent booms of thunderous fanfare. Then came the rain: huge, loud, drenching, relentless torrents of water, sloshing out of a saturated sky.

Selina Thotse, sangoma and matriarch, read this as a sign that the ancestors were happy with the arrival of her guests. Nevertheless, she dashed into the downpour to cast a crushed root into the four winds to "prevent the enemy".

The lightning seemed to retreat again, leaving the heavens to disgorge their contents on the ground below, and hammer doggedly on the tin roof above Selina's lounge. Most of this rain flooded off into the valley and the nearest riverbed.

But some of it would surely percolate down into the groundwater, to where the nozzle of the Thotse borehole lies dormant. This water will not be brought to the surface again until Selina can mediate some kind of settlement between the ancestors and the power line.