Beads Made from Different Materials

African communities originally relied on locally available materials like seeds and ostrich or marine shells to adorn themselves and their leather garments.

Recent discoveries in present-day Morocco indicate that deliberately perforated Nassarius marine shells, some still smeared with red ochre, were manufactured 82 000 years ago. Several show microscopic wear patterns, which suggests that they were strung into necklaces or bracelets. 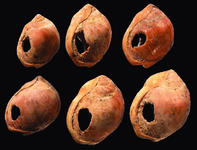 It was probably in Africa and related Near Eastern sites rather than Europe that beads were first used. Perforated Nassarius marine shells have been found both in North Africa and at South Africa’s Blombos Cave, about 300 km east of Cape Town on the southern Cape coastline. The evidence afforded by these sites indicate that concerns with personal adornment were underpinned by networks of reciprocity similar to those found among more recent hunter-gatherer communities.

Stone Age sites in east and southern Africa contain large quantities of ostrich shell beads that were manufactured in one of two ways: either by drilling a hole in an irregular fragment of shell, which was then rounded off to the required circular shape, or by first making discs, which were drilled once they had been ground to the required shape.

In both cases, the beads were subsequently strung and polished to a uniform size. The earliest record of ostrich shell beads, which were manufactured more than 40 000 years ago, comes from the central Rift Valley in Kenya. In South Africa, ostrich shell beads formed part of elaborate gift exchange networks.

Termed hxaro, this practice is still followed by some contemporary San communities, who exchange ostrich shell beadwork with spouses and blood relatives, thereby creating ties of friendship and a common sense of community between individuals and families. Beads like these are commonly strung into necklaces that include other locally-sourced materials such as seeds and the woody stems of indigenous plants.

Threaded into simple strands, or onto coiled wire, these trade beads appear to have been worn by both adults and children as earrings, necklaces, armbands and around the pelvis.

Archaeological evidence also suggests that beads may have been sewn into the hair of infants. Imported glass beads served above all to reinforce hierarchical social relations, and to secure political alliances, in many cases by creating obligations that could never be repaid.

Following the expansion of European trade relations with Africa after the Portuguese explorer, Vasco da Gama, reached India via the Cape of Good Hope, the glass beads used by communities in South Africa came mainly from Venice, where beadmaking first began in the 13th century AD.

By the 18th century, no less than 562 kinds of beads were being produced, with a large number of sub-varieties. Despite growing competition from Germany and Czechoslovakia, the Venetian producers enjoyed a virtual monopoly on glass bead exports to South Africa until the mid-1950s.

In the Eastern Cape, early interactions between indigenous communities, hunters, traders and missionaries generally included transactions involving beads. In 1843, for example, the professional hunter, Roualeyn George Gordon-Cumming (1820–1866), packed 300 pounds of white, coral, red and bright blue beads into his wagon before leaving Grahamstown for the interior, where he traded Venetian glass beads in exchange for assistance in locating animals, including lions, leopards, white and black rhinoceros, buffalo, giraffe, various antelope, hippopotami, and elephants, a lucrative source of income through ivory.