The Ribbon Reef in Sodwana Bay looks like a string of rocky formations placed in a ribbon-like pattern and has large sand patches on which rays camouﬂage themselves.

©Jean Tresfon
A school of Snappers.

The reef has an abundance of ﬁsh life and many juveniles can be seen hiding beneath the table coral and in the crevices. Many different species of triggerﬁsh, blue-and-yellow fusiliers, big eyes and kingﬁsh were seen on different parts of the reef. Spotted rock cod, boxﬁsh, a round ribbontail ray and green turtles are often seen.

The coral life consists mostly of extensive beds of staghorn coral, huge plate corals and various soft corals such as thistle coral, fleshy soft coral and anemones, with two-bar clownﬁsh standing guard. The reef is mostly untouched and is suited for the more advanced diver. This reef is truly different from Two Mile Reef in the sense that there are more game ﬁsh and the ﬁsh in this area are relatively tame.

This reef is quite ﬂat with wide patches of scattered coral and sand patches around them. It takes its name from the way the shape of the contoured coral resembles a lettuce with thousands of leaves spread out in a uniform pattern. This reef is a kingdom of juveniles, with chocolate dips in their thousands, small triggerﬁsh, damsels, soldierﬁsh and various types of goldies everywhere to be seen.

There are also potato bass, butterﬂyﬁsh, tiger angels and coral beauties hiding under the coral formations. Although this is a deep reef, it is just as exquisite as the shallower reefs and its unique beauty is deﬁnitely worth visiting.

Just imagine – a rocky mountain on the ocean ﬂoor; large overhangs with deep caves in which anything could be lurking… The scenery here is breathtaking, especially on days when the water is crystal clear and the visibility almost endless. The most beautiful of all is, a landmark on this reef, the little green coral tree on one of the ledges.

An encounter with potato bass, honeycomb moray eels and leaf ﬁsh can almost be guaranteed. The coral life on this reef consists mostly of leather and hard coral. Sponges are also to be seen. The ﬁsh life includes yellow trumpetﬁsh, coachmen, Moorish idols, kingﬁsh, knifejaws, snappers, fusiliers and much more. This is an excellent dive to book next time you visit Sodwana.

The dramatic scenery of Nine Mile offers drop-offs, pinnacles and big coral trees. A few swim-throughs and overhangs add to the experience for the adventurous diver. This reef hosts the only species of free-swimming nudibranchs in Maputaland which can be found on the drop-off along with black coral, green-wire corals and Gorgonian sea fans.

The coral tree is home to a number of species of small reef ﬁsh, including sea goldies and damsels. You can also expect to see an abundance of tropical ﬁsh, hard and soft coral, sponges, Moray eels, large schools of pelagic ﬁsh, potato bass, turtles - Hawksbill, Loggerhead, Green and Leatherback - and, depending on the time of year, whales - Southern Right and Humpback, whale sharks and dolphins. Due to its distance from the launch site, this reef is not dived as often as the more accessible ones and is in excellent condition.

This is a rather ﬂat reef with a few sponges, starﬁsh and rock formations. The marine life encountered on this reef includes game ﬁsh, pufferﬁsh, boxﬁsh, triggerﬁsh and clown triggers. The few rocks here are covered in marine growth with very few corals to be seen – mostly sponges and whip corals. This is a dive spot for advanced scuba divers. 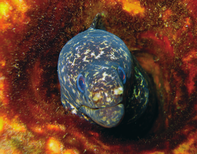 This reef has deep overhangs and gullies surrounded by sand patches, and it was the only reef in Sodwana where one yellow and two red thorny seahorses (Hippocampus histrix) were found.

Varieties of hard and soft coral can be found but one of the reef ’s stand out features is the huge black coral tree with the resident longnose hawkﬁsh. A number of cleaning stations with cleaner shrimps can also be found here. Reef ﬁsh are common in the area with sweepers and cardinal ﬁsh in the caves and overhangs.

This is a relatively ﬂat reef with a few hollows on the side and some drop-offs, all of which are situated in a huge sand patch.

The reef life here is very interesting with cleaning stations in some of the hollows and garden eels in the sand patches. The coral consists mostly of hard corals, although there are some soft coral, but not as much as on some of the other reefs. Various tropical reef ﬁsh are found here and others, such as scorpionﬁsh, lionﬁsh, rays, fusiliers and reef sharks are often sighted on this reef.