Plants of the Richtersveld

©Roger DelaHarpe
The Richtersveld is an environmental marvel that fires the imagination, and its unusual plants attract succulent-spotters from around the world. When I was in the area, I met two amateur botanists from Germany who had been planning their trip for years.
Needless to say, they were thoroughly prepared for their expedition and could hardly contain their excitement.
And I’m sure they weren’t disappointed. In the Richtersveld, 360 flowering plant species have been counted in an area of 1 square kilometre.
The Memsemb, or vygie, family is particularly well represented, with 50 out a total of 160 genera being present in the region. That’s pretty good for a desert that averages only 68 mm of rain a year.

©Roger de la Harpe
One of the reasons for this incongruous biodiversity is that Richtersveld is located in a transition zone between the winter rainfall zone of Namaqualand and the summer rainfall zone of the Nama-Karoo. In some places this zone is only 10 or 20 km wide, which makes for some interesting intermingling of plant types.
Additionally, there are three main biomes in the Richtersveld: the predominant Succulent Karoo biome, the smaller ‘Desert’ Biome (in the north and east) and isolated bits of Fynbos Biome (on the high mountain slopes).
It’s also worth noting that the mountain ranges, which tend to run in a north-south direction, stop the malmokkies and rain clouds from penetrating into the interior.
So, seaward facing slopes get lots of precipitation, while inland-facing slopes (especially in the eastern section) are drier and contain species more usually associated with the Nama-Karoo (such as euphorbias) 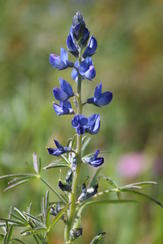 ©David Fleminger
All of these conditions create dozens of micro-climates in the Richtersveld, and each valley or ridge has a subtly specific combination of rain, wind, soil, heat and exposure.
These isolated habitats encourage ‘speciation’ – the evolutionary process whereby a species adapts to its environmental conditions until it is biologically distinct from its parent population.
In the Richtersveld, some of the endemic plant species have become so finely adapted to their specific environments, they are only found in a single valley or a ‘narrow’ location.
Still, no matter how big or small, the theme common to all the plants of the Richtersveld is survival. As described above, many of the plants store water, either in their leaves, stems or in underground organs, but the ingenuity of these determined lifeforms goes further than that.
Some plants are almost entirely subterranean, with only a few tiny tendrils poking out of the sand. Others grow flat on the ground to avoid the wind, with broad leaves that trap moisture from the ground.
Some grow fine hairs or spikes to catch the drops of dew. Some are able to close their pores to prevent evaporation. A few are psammophorous, which means that they exude a sticky substance which catches and secures a layer of sand to their surface, in order to protect themselves against sand storms.

©Shem Compion
Although most plants in the Richtersveld are evergreen (which is unusual for a winter-rainfall desert) there are a few that drop their leaves in summer to reduce water loss. Others deflect the sun with tiny scales, or by growing a waxy bark, or by retaining old leaves. Some have become miniature, to reduce their need for scarce resources.
Some only grow in the nooks and crannies of the rocks, keeping to the cool shadows. In other words, the plants of the Richtersveld are endlessly creative in their survival strategies.
All in all, the Richtersveld is said to contain 4849 succulent plants, 40% of which are found nowhere else. Many of these plants also have practical applications and are effectively utilised by the native people. 70 species are used for food (or veldkos – bush food), 40 have medicinal applications and 54 have other functional purposes, such as rope-making, soap making and firewood.
There are also several hallucinogenic plants, which are sometimes used for religious purposes. But don’t go around licking the succulents – many of them are toxic! In addition to all the strange and rare plants that haunt the fever dreams of ambitious botanists, the Richtersveld is also characterised by a number of more common plants that have become icons of the region.