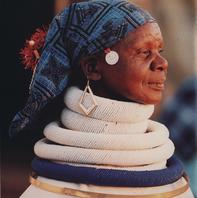 Dressing Up for Special Occasions

Extravagant clothing and adornments are commonly adopted on special occasions such as weddings, the installation of chiefs, celebrations commemorating cultural and other heroes, the coming-out ceremonies of young women, and the joyous reception by friends and family members of pre- and post-pubescent male and female initiates following their return to their communities.

The practice of dressing up stems from a desire to give expression to particular social, political or religious values.

On these occasions, certain forms of adornment, for instance, beadwork, may be used to draw attention to a variety of social roles and identities.

This includes not only the age of the wearer and a woman's status as the mother of an initiate who has just undergone circumcision, but also the ritual significance of certain colour combinations and designs.

In most cases, specific kinds of dress and the use of various types of ornamentation are prescribed by long-established practices, but the clothing and adornment worn on special occasions also attest to the innovative use of materials like plastic beads, safety pins and other commercially manufactured objects and artefacts.

Like the emergence of new styles of beadwork, the use of these materials highlights the fact that the different forms of dress and adornment produced by South Africa's rural communities have repeatedly been adapted to accommodate the changing circumstances and needs of contemporary traditionalists.

More often than not, these forms of adornment nevertheless serve to underline conventional relations of authority and respect as well as deeply entrenched gender relations. This helps to explain why it is primarily women rather than men who continue to wear older forms of dress in most rural communities.

Following the release of political prisoners and the return of exiles to post-apartheid South Africa in the early 1990s, it has also become increasingly common for others, including former political exiles, to affirm a sense of pride in their rich cultural heritage by wearing clothing and various forms of adornment associated with rural communities.

In most cases, however, dress styles adopted by those seeking to show their respect for indigenous cultural practices tend differ in important respects from those worn by rural traditionalists. This can be seen in the tendency to adopt hybrid styles of dress and adornment that combine various local forms with others borrowed from both the catwalks of Europe and west and east African communities.

Since the 1990s local fashion designers have become active in promoting an interest in clothing inspired by indigenous designs, among them Nandipa Madikiza and Fred Ekoka. In 2003, the now internationally celebrated local designer, Laduma Ngxokolo, who won the South African Society of Dyers and Colourists Design Competition, was awarded first prize in a follow-up competition in London for his men’s knitwear range inspired by Xhosa beadwork styles.

Among the Bantwane, women of all ages shave part of their heads and dress their hair with oil and other substances on important ritual occasions....more

Although today it is less common to find women who practise this art form, some still make the beadwork items worn by their sons....more

Since the African National Congress came to power in 1994 it has become common for people to declare their support for this organization through beadwork....more

The desire to preserve indigenous customs and various forms of dress is still widespread, and even small children commonly wear beads on festive occasions in rural communities....more

The adoption of grass garments and ornaments alludes to fertility, and hence to their future roles as wives and mothers....more

It is usually assumed that all rural traditions date back to pre-colonial times, but the practice of inventing new ones is fairly common both in South Africa and elsewhere....more

At church services and on other ritual occasions, South Sotho women wear colourful dresses decorated with strips of bright braid....more

Unlike the headdresses worn by married women, the styles of male headdresses tend to be dictated as much by personal choice as by convention....more

In contemporary KwaZulu-Natal, married Zulu women commonly wear elaborately beaded capes as a sign of respect to both the ancestors and their husbands' families....more
©2019 South Africa Online (Pty) Ltd. SouthAfrica.co.za. All Rights Reserved.