©Jean Tresfon
Healthy corals.
The reefs support as many as one million species of animals and plants, only a fraction of which have been documented and described. Conservation International reports: Among the best-known groups are at least 5 000 species of fish, over 10 000 species of mollusc and more than 800 species of reef-building corals. Approximately 30 percent of marine fish species occur on coral reefs.
Reefs occupy about 284 000 square kilometres, mostly along shorelines. They act as nurseries to the fish that feed millions of mouths, mostly in developing countries, provide building materials and medical source products, attract tourists, and shield coastlines from the ravages of wave action and erosion. The problem with reef builders is that they are pernickety about where they live: they can only grow where there is sufficient sunlight reaching their working parts, but not too much; they prefer tepid water between about 23°C to 30°C; the water that surrounds them must be at a suitable chemical equilibrium to enable them to build their limestone structures, and they simply won't tolerate a home fouled with sediment of any sort.

©Jean Tresfon
Corals are under pressure from human activities.
Reefs have been taking a hammering for years. Over-exploitation for building materials; physical damage by fishing nets, boat anchors and souvenir-collecting divers; pollution from sewage and agricultural runoff; and sediment from erosion on the mainland are all compromising the survival of these slow-growing aquatic communities.
Already 25 per cent of the world's coral reefs have been destroyed or badly degraded owing to human activities and global warming, and the 'prognosis for their survival is grim without a major global conservation effort'. In terms of global warming, coral's most immediate enemy is rising temperature - not so much a gradual increase over years, but frequent episodes of temperature extremes predicted to come with the general trend in rising temperatures.
Professor Michael Schleyer of the Oceanographic Research Institute (ORI) in Durban: 'Gradual heating is bringing coral communities to their bleaching threshold. When a sufficiently hot temperature spike comes along, lasting for days, it can push them over the threshold.' It's this that strips the colour - and often the life - out of coral as bleach removes stains from your whites. To understand bleaching, we need to look into the strange workings of coral itself. It's a bit of a mind bender if, like me, you are not biologically inclined. 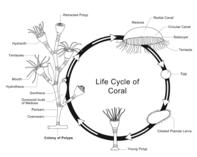 ©Johan Boshoff
The life cycle of coral.
Corals are animals disguised in plant fancy dress, living as one with plant material woven into their skeletal structure. A hard coral, for instance, is an animal that will start out life as a tiny larva, not unlike many other young invertebrates such as mussels or clams. It will then be cast out into the water by its parent.
After a short-lived adventure at the whim of the current, it will fix itself to the surface of the reef, often the dead exoskeletons of previous generations of coral, and begin to metamorphose. As it grows into adulthood, the animal builds a skeletal structure by extracting calcium carbonate, essentially the component of limestone, from surrounding seawater. It lays this down according to the blueprint dictated by its DNA. Fixed to the ocean floor, it then eats the tiny animals - zooplankton - floating in the ocean around it. Zooplankton supplies the animal with nutrients such as phosphorus, but not with its total daily calorie requirements. To obtain the food it needs to stay alive, coral has to rely on greens: not to eat, but rather to feed it.

©Jean Tresfon
Corals get their colour from sea algae.
During the hundreds of millions of years over which corals have evolved, they have entered into an inseparable coalition with a type of single-celled algae called zooxanthellae (pronounced zoo-zan-thelee). These algae weave themselves into the skeleton of the coral and go about photosynthesising, as plants do. They take carbon dioxide diluted by the water and, along with the energy of sunlight streaming through the water, produce amino acids and carbohydrates.
Most of this - up to 95 per cent - they pass on to their hosts, the coral. Like any pot plant, the algae need nutrient fertilizers, which they receive in the form of ammonia and phosphate from the corals' waste products. In this way, the two - which look like one to the casual eye - keep each other well fed. So successful is this symbiosis that it places the coral and zooxanthellae in the upper echelon of primary producers in these richly diverse oases of the sea.
Reef-building corals provide the reef infrastructure, zooxanthellae supply the window dressing, and all the other creatures move in: snails, fish, slugs, starfish, sea cucumbers, urchins, anemones, flatworms, crabs, clams, seahorses, shrimps. Zooxanthellae are the finest artists of coral reefs - they provide the flamboyant colour. If they die or are forcibly evicted, they leave behind mute, limestone skeletons, tombs of their former hosts.