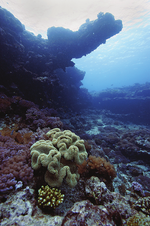 Any number of factors could upset the algae in the coral and trigger a 'bleaching' event - sunburn, disease, unbalanced salinity, or sediment increase. But the biggest culprit in mass bleaching is heat.

Professor Michael Schleyer of the Oceanographic Research Institute (ORI) in Durban explains what happens inside coral when the water around it heats up: Anything that experiences an increase in temperature will find its metabolism increasing. In this instance, the plant cells of the algae go into overdrive during the photosynthesis process.

A byproduct of the light reaction in photosynthesis is oxygen. When the metabolism of the plant cells is stepped up, they produce an excess of free oxygen radicals. This irritates the host tissue so much that the corals then either expel the algae or digest them. Literally, overnight the corals will bleach.

Because they are dependent to such a great extent on the photosynthetic products of the zooxanthellae for food, the corals will slowly starve without this algae. It may take a few days, but eventually, the coral will die. Some people find a bleached reef beautiful, Schleyer says, something like a snow-covered landscape.

But really it's just a graveyard. By 2040, coral bleaching will be worse than the 1998 event. Temperature not only kills coral but inhibits its reproduction and persistent bleaching events such as those predicted for twenty to forty years' time may mean that corals that are not killed will fail to reproduce - with obvious consequences.

If a coral animal becomes bleached, it may not necessarily be fatal. Loss of zooxanthellae may only be partial and they may return before the coral starves. Some colonies appear to be more resilient to bleaching than others and could at least keep the reef partially functioning until it can recover more fully.

The more extreme the bleaching event, however, the greater the mortality of corals. And the more frequently these events happen, the more dire their future. Corals may recover if the bleaching is only partial. But, if it's total and the animals die, eventually the reef will crumble into a rubble bed of deceased life. Sea surface temperatures have increased by almost 1°C in some tropical regions over the past one hundred years.

However, 1979 seems to be a pivotal date for coral: prior to then, there are virtually no reports of mass bleaching events, even from well-observed research sites. This could be due, in part, to the fact that people were not looking before then.

The temperature increases over the previous century have brought corals perilously closer to their upper thermal limit in certain parts of the ocean. This means that slightly warmer years are now more likely to administer a lethal dose of heat, thus triggering mass bleaching.

As atmospheric carbon dioxide levels increase, so will the ocean's uptake of carbon dioxide by surface water will rise, increasing the carbonic acid content of the water.

This will shift the water's pH balance to the wrong side of the chemical equilibrium needed by corals to lay down their calcium carbonate structures. Once the temperature increases beyond the standard that promotes coral growth in Sodwana, the building of hard corals could diminish once again. Temperatures are already approaching the coral bleaching threshold for the region and, if warming continues, these reefs could follow the same fate as their northern neighbours.

The Oceanic Research Institute (ORI) researchers have already established the critical bleaching temperature for Sodwana's corals: about 28.8°C. They discovered this when a bleaching event occurred in 2000 after a period of elevated temperatures and exceptionally clear water where more sunlight penetrated the water to the reefs.

The reefs took a staggering blow. What hope, then, do the next fifty years hold for coral reefs? Corals are adapted to extremely specific habitat requirements, so they have painted themselves into a bit of a corner.

The rising sea levels expected with global warming might normally not have been a threat to coral. If time allowed it, the corals could simply have built their way up towards the light. But, with their building abilities impaired by other changing conditions, they may not be able to keep up with the rising ceiling above them.

Joan Kleypas from the National Centre for Atmospheric Research in Boulder, Colorado, predicted in 1998 that the sea, in which coral reefs grow could become disrupted in a way that will tear their world apart. By 2050, sea surface temperatures are expected to rise by 2°C - this will shift their ideal temperature conditions poleward by 18 degrees of latitude.

©Jean Tresfon
El Nino changes the conditions of the oceans and has an affect on all the sea creatures.

The El Nino Southern Oscillation (ENSO) is a natural cycle that originates in the Pacific Ocean and interrupts 'normal' weather patterns around the globe. Typical conditions in the Pacific see strong westerly trade winds driving warm surface water towards the west.

The winds literally slap their rain-bearing waters up against Indonesia, lifting the sea level there half a metre higher than on the other side of the ocean along the Ecuadorian coast. Meanwhile, Ecuador's coastline sees a nutrient upwelling. During an El Nino event, the trade winds slack off. This interrupts the usual heat transfer, displacing it to the east instead.

Besides the fact that this stalls the nutrient upwelling in Ecuador and Peru, usually collapsing their fisheries, it also means a build-up of heat in the centre of the Pacific. This heat accumulation ripples throughout the planet's oceans, increasing sea surface temperatures in places and changing weather patterns.

El Nino events bring flooding in Peru but drought in Indonesia, Australia and South Africa. They are regular, cyclical events that occur about every three to seven years - sources disagree somewhat on their frequency. Global warming is expected to increase the frequency and intensity of El Nino events.

For reef-supporting oceans, an El Nino event usually means a spike in sea temperature that can make life rather difficult for corals. In 1998 a humdinger of an El Nino heated waters throughout the tropics, producing 'hotspots' where the sea surface temperatures exceeded the regional maximum by more than 1°C.

What followed was the most severe mass-bleaching event on record. For the first time, coral reefs in every region of the world recorded severe bleaching events. In some places, such as Singapore, bleaching was recorded for the first time. Many massive corals, which may live for well over 1 000 years, have died as a result of the 1998 event, including some with an age of up to seven hundred years.