Breast Cancer: One in Nine
My Year as a Statistic by Tracey Derrick 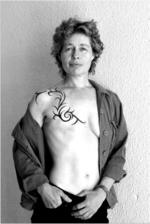 One in nine women contract Breast Cancer in South Africa. This statistic takes into account the high prevalence of HIV and TB. I was diagnosed with Breast Cancer in May 2008 and this project was undertaken in response to my illness, its treatment and my survival. I am ‘one in nine’ and as the active subject of my own investigation, it helped me understand my own condition and integrate it into my life.

Susan Sontag wrote when diagnosed with Breast Cancer, “the disease itself arouses thoroughly old-fashioned kinds of dread. Any disease that is treated as a mystery and acutely enough feared will be felt to be morally, if not literally, contagious”. As a documentary photographer, I position myself relating to and interacting with my subjects.

I document small communities, the marginal people. Suddenly, through my illness, I’ve become a member of a marginal group. My way of coping has been to analyse my own story through images, which helped me reach out and connect with others who, like me had at some point during their illness, felt outside the experience of everybody else.

Through self-portraits taken during my illness and portraits of eight other Breast Cancer survivors, I have used photography as a tool to explore our new reality - it has become our visual diary. Together, our portraits symbolically represent “one in nine”. The story is about medical body transformations, changes in thoughts and feelings around our identity, new ways of living with death (instead of fearing it) and most of all, stories of survival and moving forward.

By exhibiting this work, I hope to deepen the knowledge about breast cancer and show that the value of trauma is a chance to find oneself.

©Tracey Derrick
Identity.
“Illness is the night-side of life, a more onerous citizenship. Everyone who is born holds a dual citizenship, in the kingdom of the well and in the kingdom of the sick. Although we all prefer to use only the good passport, sooner or later each of us is obliged, at least for a spell, to identify ourselves as citizens of that other place.” — Susan Sontag, “Illness as a Metaphor”, 1978

After a tumultuous and courageous battle with cancer, Tracey Derrick passed away in September of 2019. SouthAfrica.co.za is lucky enough to showcase her photographic legacy, and her memory will live on through her imagery on the website.