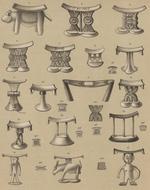 When Muller and Snelleman travelled through parts of Southern Africa in the early 1890s, they recorded the wide variety of headrest styles and forms they encountered, many from present-day Zambia and Mozambique.

A number of these headrests included caryatid figures of humans and wild or domestic animals.

Although they were unable to identify some of these animals, one plate includes a hearest depicting an antelope (16), while others, in a separate plate XXVII, represent an elephant and a rhinoceros. 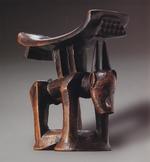 Culture: Tsonga Period: 19th century Material: wood Height: 15 cm, Width: 5.5 cm This neckrest depicts an antelope that seems to be dozing peacefully beneath the "shelter" of the horizontal strut.

The depiction of antelopes on African headrests was not uncommon. There are numerous examples among both the Tsonga and other communities further north, such as the Luba and Yaka from the present-day Democratic Republic of Congo.

Antelope are also found as handles on the lids of carved Lozi pots produced in present-day Zambia in the 19th and early 20th centuries.

Culture: Tsonga Period: 19th century Material: wood Height: 12.3 cm, Length: 21 cm Horses are not indigenous to Africa. They were introduced into West Africa south of the Sahara via trans-Saharan trade routes in the tenth century, and into Southern Africa by Europeans in the sixteenth century.

Because they could survive only outside tsetse fly belts, they were rare in many parts of Africa. But from their first introduction horses became associated with prestige and power, qualities often ascribed to the European military forces that invaded and suppressed indigenous communities.

The use of the horse on a headrest would have been one way of indicating actual or desired prestige on the part of the owner.