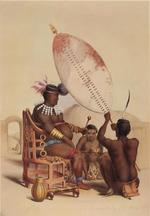 From the very earliest days of European settlement on the Natal coast, the headrests used by Zulu-speaking communities fascinated colonial officials and missionaries.

Examples from the Zulu kingdom were recorded by artists such as George Angas, who visited the royal homestead of the third Zulu king, Mpande, in 1879.

Numerous headrests found their way into European collections in the course of the 19th century, many acquired as trophies of war during the Anglo-Zulu war of 1879.

Concerned to glorify God’s work by collecting, cataloguing and classifying plants, animals and minerals into understandable categories, they also acquired ritual and utilitarian objects, and artefacts made for sale to outsiders. Some headrests were acquired in exchange for food during a devastating period of drought in the early 20th century.

Headrests, which in most cases were used to support the neck, often protected elaborate hairstyles.

Among Shona communities, they were owned only by men, but both men and women used headrests among Zulu and Tsonga-speaking communities, where they usually formed part of the wedding gifts a bride took to her new home, which also included grass sleeping mats and other household items such as pots and baskets.

A man with more than one wife might, therefore, end up with headrests in different carving styles.

©Hunter, 1936
Headrests sometimes exploited the form of the branches from which they were fashioned. Unlike those with supports carved from a rectangular or square block, examples like these were seldom embellished through the addition of decorative motifs to the vertical supports.

While the practice of embellishing headrests with complex motifs was widespread, some carvers from the Msinga area of present-day KwaZulu-Natal made comparatively simple, block-like headrests. In a number of cases, bold geometric patterns were either stamped or burnished onto the surface.

Period: 19th century Material: wood Height: 21.5 cm, Length: 55.5 cm When receiving guests or relaxing in the company of multiple wives and their children, the headrests of important leaders such as chiefs and kings were also used as armrests.

This elaborate example, which is supported by four arched legs with looped projections at both ends, was clearly produced by a highly skilled carver who probably worked for wealthy patrons.

Only seven examples in this style are known to have survived, five of which are in public collections in the USA, the UK, the Netherlands and South Africa.