Why Do Zebras Have Stripes?

A Dazzle of Zebra

©Shem Compion
There has been some suggestion that the stripes of a zebra are a form of camouflage. True camouflage is the interruption of an objects solid outline such as the effect created by alternating black and white stripes. In certain light conditions, this may be true and effective but camouflage or disruptive markings generally work best against a mottled background and usually, zebra are found more in the open.
Furthermore, camouflage works best when combined with silence and motionlessness. Zebra are active and noisy. Predators also see in predominantly black and white (low light vision that detects movement easily) so surely black and white are the most obvious colours to them?
One theory regarding why zebra have stripes suggests that the confusion caused by a group of zebra fleeing simultaneously (as they do bunched in a group and followed by the stallion) creates a screen for the individuals’ escape. The blur of black and white supposedly makes it difficult for predators to separate out an individual target.
Although predators do still catch zebra successfully and regularly, this may have some bearing as a defence technique since it depends on the individual being part of the fleeing unit. The weaker, older or slower members of the group may lag behind and generally, it is the isolated members of the population that are picked off by predators first. Zebra are however group-orientated animals and will attempt to rally around their weaker individuals during times of threat. 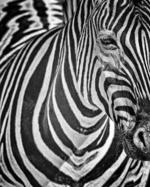 ©Peter Delaney
Each zebra has a unique stripe pattern, a bar-code or fingerprint so to speak. When young zebra are born, the mare will screen her foal from any other zebra until her own stripe pattern has imprinted on the youngster, ensuring recognition.
The Burchell’s Zebra has characteristic ‘shadow stripes’ between the black and white stripes of the rump, which gives the body a dirty chestnut colour.
Telling male and female zebra apart is fairly difficult. The males have a narrow black stripe running vertically between the legs and under the tail. Females have a broader black wedge between their hind legs and under the tail.
The tail of a zebra is an incessant fly-swat. The whisk of black hair on end is a useful device in this regard.

©Shem Compion
Zebra are keen dust-bathers and frequently roll in loose dirt probably to help with parasite control and thermoregulation. Zebra are able to roll over on their backs completely, a trait not shared by antelope. Zebra also enjoy a good rub of the head and shoulders on objects like rocks or termite mounds. They may even queue up in rank order to perform this apparently pleasurable task.
Zebra sleep a fair amount enjoying a midday siesta when it’s hot (while standing). They also snatch a full seven hours after dark. This they do lying down, even on their sides (especially the foals). Usually, one animal will remain standing and alert to watch for predators.