South Africa is a dry country; its rivers are often stretches of sand rather than of flowing water. Its estuaries, pans and vleis, too, are at the constant mercy of long droughts and human encroachment. Despite this, or perhaps because of it, our wetlands have a concentration of birdlife of the widest variety, and often in vast numbers.

Within the wetland habitat, there are countless niches for individual species to exploit without intruding on others. Perhaps the best example of co-existence is that of the nomadic greater and lesser flamingos, Phoenicopterus ruber and P. minor respectively, which have the same range and usually feed side by side in flocks.

While the greater flamingo wades in the shallows, dragging its beak for small aquatic creatures, the lesser flamingo draws its beak along the surface, filtering for algae and plankton. Both species prefer large stretches of brackish water.

It is, however, the fish eagle, Haliaeetus vocifer, that epitomizes the wild waterways of Africa. Fish eagles may be found wherever there is permanent water. Their piercing cries, with head thrown back, and their swooping dives to snatch a fish with their powerful talons are a delight to nature lovers. The famed bird artist and soldier, Claude Finch-Davies, once breakfasted on a fish seized from an eagle that had landed a meal too large for it to carry off!

African skimmers, Rhynchops flavirostris, are wary, unapproachable, intra-African migrants that are common in the Okavango Delta but now are rare in South African waters. At dusk and on moonlit nights they can be seen flying fast and low, trailing their unique lower mandibles in the water, ready to snap up anything edible.

A conspicuous and therefore well-known visitor to our shallow inland waters and estuaries, the African spoonbill, Platalea alba, roosts communally but forages solitarily or in pairs, sweeping its beak from side to side and probing the mud for small fish and aquatic invertebrates. Like other large waders, the spoonbill is threatened by the fickleness of its habitat. Its numbers are declining along with the disappearance of our wetlands. 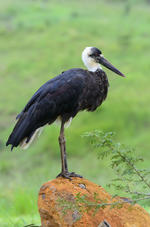 In South Africa, the woolly necked stork, Ciconia episcopus, is confined to the high rainfall areas in the east, and even there it is an uncommon resident. To the north of the country's borders, it can be found feeding in large swamplands and rivers. It is smaller and darker than the more familiar white stork, Ciconia ciconia.

If you hear what you think are hippopotamus grunts along the fringe of a shallow lake, you may be surprised to discover that the source is altogether a different kind of giant — the goliath heron, Ardea goliath. This is the largest of the herons and also, at up to 1.5 m from tail to beak tip, one of the biggest birds you are likely to see. Its diet comprises frogs and many small animals.