©Susan Schoenian University of Maryland Extension
Goat carcassess. Research testing 12-month old animals shows goat meat has less fat than mutton. Both species were rated almost equal in palatability scores.
Boer goat breeders are represented by the breeder associations such as Boerbok SA.
The indigenous meat goat industry is not organised in the form of provincial and national structures, but some 40-odd registered breeders of indigenous goats belong to the Indigenous Veld Goat South Africa (IVG SA). IVG SA focusses more on the advancement of goat farming than the marketing aspect of goat meat.
Nevertheless, a very effective marketing system with the assistance of traders/speculators for goats has developed over many years. Due to the demand for goats in the informal market and the shortage of goats, farmers are getting good prices, especially during specific times of the year, often linked to cultural celebrations.
The majority of meat goats marketed in South Africa are sold by private transactions in the informal market to be slaughtered for religious or traditional purposes. Goats being marketed directly from the farm can range from between 3 - 6 months and older. This is supplemented by a seasonal supply of older Angora goats (+five years), mostly marketed through agents in KwaZulu-Natal.
Commercially, goat meat is sold through some Muslim butcheries in Lenasia, Johannesburg and certain Spars and butcheries throughout the country.
From 2003 to 2008 the food retailer Shoprite Checkers was marketing chevon, branded CHEVON. An extensive campaign to educate the consumer about chevon was undertaken by a private company in 2004. Kalahari Kid Corporation (KKC) succeeded in placing chevon on the shelves of a number of supermarkets in South Africa (Pick & Pay, Checkers Hypermarket and Spar) and launched a campaign to make consumers aware of the excellent qualities of chevon.

©Lourens Erasmus
Indigenous goats on sale at an auction in Pietermaritzburg.
Kalahari Kid Corporation is an entity wholly owned by the Northern Cape Provincial Government and is the ‘Special Purpose Vehicle ‘(SPV), used to commercialize the goat industry in the Northern Cape. The intention is to extend this into other provinces of South Africa. KKC also assists other provinces with the developing of goat farming co-operatives. This could assist emerging goat farmers to become self-sustainable and, depending on the size of land available, grow into commercial goat farming. Live goats are also bought from emerging farmers and involving them in the total value chain.
The Indigenous Veld Goat South Africa (IVG SA) recommends that more attention is given to the promotion of goat meat. This will help develop the market to increase consumer demand. In turn, it may encourage stock owners to farm with goats, rather than to just breed for stock.
‘Commercialization of goat meat production will increase the slaughtering of goats in the formal sector and can increase the income generated from meat goat farming,’ advises IVG SA. 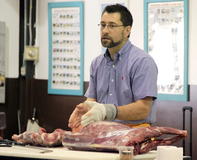 ©Susan Schoenian University of Maryland Extension
Dr Paul Kuber of Washington State University explains to consumers about portioning a goat carcass.
Another study conducted in 2005 by L Simela of the University of Pretoria presented consumers (of a range of income and age groups) with two groups of goat meats and compared this with lamb and mutton. Apart from the slight difference in tenderness between mutton and chevon (goat muscles have coarser fibres than sheep muscle), consumers found meat from sheep and goats of similar age (2- to 6-teeth age) equally acceptable.
It was also found that consumer level of education was clearly the most influential factor on acceptance of the sensory attributes and consumption intent of goat meat. The study concluded that chevon is acceptable to South African consumers and may be as acceptable as mutton provided the meat is from goats two years or younger in age.