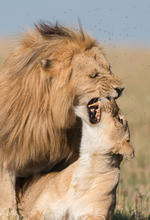 ©Shem Compion
Males determine that a female is in oestrus (ready to mate) by flehmen. They frequently smell the rump of the female or the area where she has recently urinated and then pulling back the top lip in a grimace (called flehmen grimace) muscles on the palate are contracted to force the steroid hormones into the Organ of Jacobsen. This chemo-receptive gland is designed to detect hormones that indicate reproductive status.

Mating in lions is a very intense affair. A pair will mate every 20 minutes for 4 days and nights with each about lasting one minute. Lions have a low fertility rate and a very small percentage of mating results in conceptions. In fact, for every cub reaching one year old, the parents would have mated 3000 times. The protracted copulations serve two functions. Firstly they stimulate the female to ovulate and secondly they provide the opportunity to confuse paternity. The male that begins mating with a female may become so exhausted by day three or four that another of the coalition members will take over. Since both believe the cubs to be his, both have a vested interest in protecting the offspring.

Although females often elicit mating by presenting their rumps (lordosis) to a male, by the end of a bout she appears irritable turning to swat the male with her paw as he extracts. This is due to the fact that male lions have barbed penises and the extraction is extremely painful. The neck-biting and snarling that takes place during mating are ritualized.

©Shem Compion
Lion cubs are born blind and weak (altricial). The gestation period is very quick since lionesses need to hunt in order to survive and provide for the pride. They would be severely disadvantaged if they were weighed down by heavy pregnant bellies for protracted periods of time. As a result, the cubs are underdeveloped at birth and need to be kept in hiding while their strength grows enough to join the pride and hold their own. This is the converse to their prey. Antelope need only to eat grass to avoid starvation and a pregnant belly is no inhibitor to this. Once they are born, they must run to escape predators and so their young are born precocious (able to move and see immediately) but this comes of having longer to develop in the womb.

©Shem Compion
Lionesses often synchronize their breeding. This is useful as all the mothers will then mutually suckle each other's cubs. However, if there are very new cubs in a pride as well as cubs three months old or more, the mother of the younger cubs will keep her offspring away from the pride for longer than the usual 6 weeks. This is because the older cubs are stronger and have easier access to the milk on offer to the exclusion of the smaller cubs.

Lions experience an exceptionally high cub mortality of up to 50%.