©Peter Delaney
Leopards are powerfully built animals with strong necks and large skulls and jaws for executing kills. Older males develop particularly thick necks probably to appear more impressive to rivals and to facilitate fighting ability. High shoulders accommodate a rather depressed chest, which is an adaptation to dragging and hoisting prey, which drapes between the front legs, at these times. Leopards are able to hoist kills sometimes as heavy as their own bodies. The dew claws, placed higher up the wrist, are essential for climbing trees and hoisting heavy loads.

©Shem Compion
The long tail of the leopard is white-tipped and stands out from behind. This is one of its ‘follow me’ signs and when hanging relaxed is just at a height for young cubs to see and follow in long grass. The tail also indicates the mood of the cat and can be used as a non-vocal form of communication. Youngsters may target the white end of a parent’s tail in bouts of play-pouncing.
Leopards use their long tails for balance during hunting pursuits or when climbing trees. 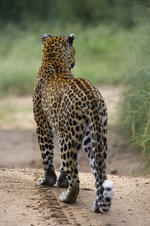 ©Roger de la Harpe
The ears of a leopard are small and rounded. From behind they have black markings and these act as another ‘follow me’ sign to cubs following behind a female in long grass. Having small ears helps to reduce protruding parts on the head critical for successful stalking.