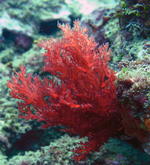 Seaweed resources in South Africa are included under the Marine Living Resources Act, with the harvesting of specific seaweeds or kelp permitted in concession areas, along the South African coast.

No ‘kelp farm’ with cultivated kelp exists in South Africa, although the green seaweed Ulva, sometimes called sea lettuce, and Gracilaria gracilis are grown at some abalone farms on land to provide supplementary feeding for abalone.

Red seaweeds are also wild-harvested for commercial purposes, mainly alginate production, but is highly dependent on international market prices. Commercial production of red seaweed in the Saldanha Bay area was abandoned in the 1990s after wild populations disappeared due to developments in the bay.

Kelp is a large brown seaweed, and there are two main species in Southern Africa: Ecklonia maxima and Laminaria pallida. These two species form the canopy of an underwater ‘forest’ with Ecklonia growing up to 17 m tall and Laminaria mainly as sub-canopy.

These forests form ecosystems, in which many species are interdependent in terms of protection and food. These include kelp-eating fish, wild abalone, rock lobster and sea urchins. While the collection of kelp is easy to measure in terms of the yield, the effect on the ecosystem is likely to be more subtle.