Individual Development of the Pedi

©Dr Peter Magubane
Pedi women who are married usually have a better status in Pedi society than women who are unmarried.
Like other Bantu-speaking peoples, a Pedi marriage (lenyalo) does not just legalize a relationship between individuals: it is a group concern, legalizing a relationship between families. In essence, it involves the transfer of payments (magadi) from the groom's relatives to the bride's relatives. In return, the bride's family publicly transfers the fertility capacity of the bride to the place of the groom (bogadi), and thus their commitment to the groom and his relatives is fulfilled only after the birth of a child.
Marriage was virtually obligatory in traditional Pedi society. It was a legal process and did not involve religious rites. Unlike the rites of passage involved in the initiation process, marriage did not change the status of either the bride or groom, but instead it advanced their existing status as fully initiated adults in Pedi society. The new status acquired through marriage was a legal one, which increased the powers, obligations and duties of a status already acquired.

©Dr Peter Magubane
Pedi children in front of their home.
The birth of the first Pedi child was an event of great importance: it not only brought a new member into the household, but also raised the mother to the highest status attainable. In addition, it concluded the obligations of the mother's family to the father and his family, while proving the manhood of the father and perpetuating his line. Confinement and the birth of the first child normally occurred at the home of the mother's family. After the birth, both mother and child returned to the father's household where a feast was held, to which the mother's family made a contribution of meat and beer. This discharged their final obligation to the father's family to provide a child through one of their members, for which magadi, a set number of cattle and livestock or their monetary equivalent, was paid.
In recognition of the mother's new status, the father built a separate dwelling for her, as she now had the right to possess and control her own homestead. On her return with the baby, mother and child were secluded for a period in the new homestead. After this, a special feast (ngwana o tswa ntlong) was held to celebrate the arrival of the child in the paternal home. During the feast, ceremonies were performed which concluded the initiation of the child into the family and the mother into her new status. 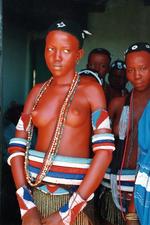 ©Dr Peter Magubane
A Pedi girl undergoing initiation.
In traditional Pedi society, gender distinction was a fundamental characteristic of initiation, emphasizing the essential differences between the sexes. Initiation simultaneously marked the passage to adulthood and invested the initiate with citizenship of the community, and, in the case of males, the right to participate in political and jural functions. An important benefit that initiation traditionally gave was to reinforce Pedi paramountcy over the other peoples within their empire or sphere of influence: lesser chiefs had to obtain permission from the Pedi paramount chief before they could start a new initiation. The right to grant or refuse permission enhanced the authority of the Pedi paramount chief, in that it gave him control over the right to citizenship and political and jural participation.
In more recent times, with individual chiefs at liberty to license initiation independently of central control, the ceremony is a source of considerable wealth to these chiefs, who are often accused of misusing the funds they collect in this way. Initiation, known either as koma (from go koma, to circumcise) or lebollo (from go bolla, to hurt), was one of the most sacred institutions and important cornerstones of traditional Pedi culture.
Attendance at the initiation schools was compulsory for all boys and girls of the appropriate age (which varies widely), but the two sexes were initiated separately. The boys underwent two sessions; the girls one. Through initiation they attained full adulthood and were incorporated into a distinct group. Initiation is still important to many Pedi, but has become a source — or perhaps a reflection — of social division. A major cleavage in contemporary Pedi society, between baditshaba (traditionalists) and bakriste (Christians), derives partly from contrasting religious beliefs but also from attendance or non-attendance at initiation. It may also reflect differences of social status and education.
While much of the Pedi initiation has remained the same, there may have been certain changes since the details were gathered on which the following account was based. It is therefore rendered in the past tense. The first of the boys' sessions (bodika) introduced them into full membership of the group. The second (bogwera) incorporated them into the society of men, according to the class and position in society to which they were born. Bogwera entitled the man to sit around the ceremonial fire and take part in political and judicial activities. In contrast, the girls' initiation (byale) simply incorporated them into membership of the group. They were barred from participating in any political and judicial activities. They were also excluded from the elite status which males attained through their second initiation session.
©2020 South Africa Online (Pty) Ltd. SouthAfrica.co.za. All Rights Reserved.