©Shem Compion
Elephants are highly social animals. Their complex society focuses on maintaining group cohesion and a strict discipline regime ensures social order all times. Due to their enormous size, elephants could cause serious damage to themselves and each other if their social behaviour was not regulated and ritualized. Herd life predominantly revolves around guarding, rearing and teaching calves, activities engaged in by all herd members. Since it takes 22 months for a calf to be born and the calving interval thereafter is at least four years, calves are family investments that are not easily replaced. For the first two years of its life, an elephant calf is intensively mothered but childhood is protracted and continued learning occurs. Amongst bachelor groups, young males keep the peace amongst themselves by ritualized tussling that establishes strength and therefore dominance amongst the males without the need to fight and thereby injure themselves except when an oestrus cow is at stake.

©Shem Compion
Elephants practice a matriarchal society. Females live in herds of related individuals with their successive offspring. The herd is lead by the oldest cow known as the matriarch. Because elephants are long-lived animals and acquire knowledge through experience and learning (much like humans do), the matriarch, being oldest, has the broadest cultural knowledge. She uses this to lead her herd. Migratory routes are passed on between generations and the matriarch leads her herd to traditional sources of food and water during different seasons and times of hardship. Bulls leave the herd once they reach puberty (at about 12 - 14 years old) to subsequently live alone or in small bachelor groups. Old bulls may be accompanied by a few younger ones known as askaris. These individuals may learn social skills from the older bull and may also afford him protection in his old age. 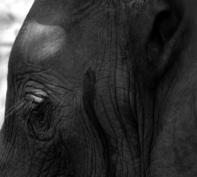 ©Karl Svendsen
Although puberty in bull elephant arrives at about twelve years of age, they only get their first chance to mate from 25, but usually closer to 35 years old. Elephant bulls must enter a state of elevated testosterone levels known as musth before they are permitted to mate with a cow. During musth an elephant bull dribbles strong-smelling urine profusely, discoloring the inside of his legs and penis and secretions from the temporal glands stain the sides of his head. Bulls become relatively aggressive due to high blood testosterone and they impulsively travel long distances taking them away from the areas where they may be related to cows. Along the way they emit an infrasonic musth call to attract oestrus cows and they challenge any other bull that they may encounter.
Bigger, older bulls quickly suppress musth in younger animals that they encounter and these give way to their superiors without much confrontation. This eliminates inexperienced animals from the race. Equally sized bulls will fight (sometimes to the death) with powerful head and tusk clashes twisting to expose the vulnerable throat and neck for attack with the tusks. The winner (holding the strongest and thus most desirable genes) then gains access to the oestrus cow in question who will only ever mate with a musth bull. Young bulls only come into musth for short periods of a few days or week while older bulls may be in musth for months at a time.
In contrast to the bulls, female elephant may mate and conceive from as early as eight years old. The first mating may be fairly traumatic for a young cow due to the large size difference between her at about 1200 kg and the mature musth bull that mates her and probably weighs in at 5 or 6 tons.