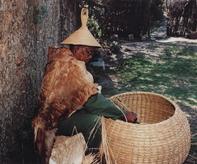 In the past, baskets were generally woven by men, who made large grass baskets to store various kinds of grain.

Most contemporary examples are intended for outside buyers. Baskets like these generally differ in shape and size from those produced for indigenous use. 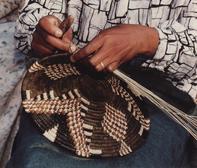 ©Dr Peter Magubane
Historically, men wove baskets and the lids Zulu-speaking communities still use to cover clay beer pots. Some also continue to demonstrate the skills required to make baskets at cultural centres and tourist villages. But it is now mainly women who produce baskets for both domestic use and sale to outsiders.

©Dr Peter Magubane
In present-day northern KwaZulu-Natal, women make colourful grass baskets for sale to craft centres and shops in urban areas. This tradition was initiated by the Swedish missionary couple, Kjell and Bertha Löfroth, who established the Vukani Association in an effort to assist women to generate income in the wake of a severe drought that had crippled the region in 1966 and 1967.

The women who first benefitted from the Vukani initiative invariably responded positively when asked whether they would be prepared to make things at home and bring their baskets and other items such as grass mats to the Association’s centre in Eshowe in northern KwaZulu-Natal.

The South African Council of Churches played a key role in assisting these producers to market their skills in urban centres like Johannesburg in the 1970s and 1980s. 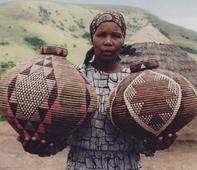 Over the years, the basket weavers trained through the Vukani initiative have passed their skills on to other women in their communities. Many of these producers have developed individual styles, with some specialising in sewing raised patterns over the base colour of their coiled baskets.By Professor Sandra Klopper
©2022 South Africa Online (Pty) Ltd. SouthAfrica.co.za. All Rights Reserved.