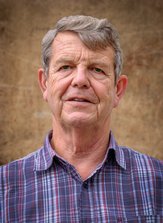 Chris Daly’s interest in photography started at the early age of fifteen when he took black and white photographs and did his own darkroom processing. After a successful career in advertising, Chris and his family moved to a small farm in the Garden route, Western Cape, where they farm self-sufficiently.

Daly started his own small advertising agency to cater for business in the Garden route area. Then in 2000, he became more serious about digital photography and decided to do all his own photographs for his company’s ads, brochures and catalogues.

Chris Daly joined the Photographic Society of South Africa (PSSA), receiving a Fellowship in 2011, as he served for a number of years as Director for the Garden Route. Here he received numerous honours, including an Associateship in Digital Photography in 2007, as well as honours in Audio Visual and Published works.

Daly has also received his AFIAP honours – Artist with the Fédération Internationale de l'Art Photographique. He is a recognised judge in both Digital Photography and Audio Visual for PSSA Salons and serves as a judge on the PSSA Honours Panel. Daly enjoys sharing his photographic knowledge and has given a number of workshops, presentations and talks around the country.

Throughout Chris Daly’s career, he has developed his skills in landscape photography covering South Africa, Namibia and some overseas destinations. He enjoys trying new things and has made audio-visuals using stills and video, lapse sequences and drone photography.