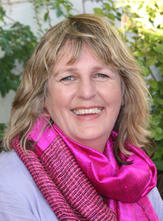 Ann Gadd is an Artist and Author. Ann spent 15 years working in advertising as an Art Director. Finally, (after enough Life Skills Coaching to get the Border Bulldogs to win the World Cup) she opted out and into being an artist, author, alternative practitioner and a healthy amount of free-lance (both written and drawn).

Oh yes, and facilitating workshops for individuals and corporates, as well as becoming the SA National Board-Sailing Champion (in her spare-time). (In between being a mother to her two kids and several other animals.) During the initial years, she was extremely grateful for the benevolence of the Revenue Services (tax refund), the galleries who liked her work, and the patrons who bought it. Later, she was thrilled when publishers accepted her books and magazine editors didn’t reject all her offerings.

Writing: Ann has had 22 books published across a variety of subjects that interest her – from the Enneagrams, travel, place names, relationships, quirky ‘sheep’ books, habits (why we do them), fairy tales and our psychological development, amongst others. Currently she has translations in 15 languages.

She has also been a regular contributor to various magazines, more recently in the photo-journalistic field. Ann has had numerous articles written about her work, and as such, has appeared on talk shows and TV (although her most enjoyable claim to fame, was to be the guest Agony Aunt for a UK Woman’s Magazine)!

Art: A commission of 226 paintings for the Absolut Hotel in Ireland, kick-started her art career. She persevered, (working a lot harder than in advertising), destroying the archetype of the unreliable artist. Her quirky ‘sheep’ paintings started to flock off. Exhibitions followed in New Zealand (they like sheep there) Ireland, Italy and England. Ann’s 5 500 artworks to date, hang in collections worldwide.

She developed her Ewe/You series of work into a range of merchandise under the Art for Ewe brand. Whilst maintaining her ironic humour, she has painted several other series, including Palindromes and Popular Icons, Zulu Lulu and more recently Meanwhile in Africa…