The Role of Sugar in Food Systems

©Marinda Louw
Too much sugary food will have a negative impact on your health.

Sugar used to be a condiment we added to food to enhance its flavour, like a sprinkle of salt or pepper. Today refined sugar from sugar cane and corn syrup from maize are used in such quantities that it’s often treated as a bulking agent. It’s also hidden in many unexpected places and in many processed foods, even savoury ones.

This kind of sugar doesn’t only rot our teeth. It’s at the root of obesity and diabetes, and is even now being linked to heart disease, certain cancers and dementia (the US Brown Medical School is linking high blood sugar and insulin exposure in the brain with Alzheimer’s, and they are proposing that this degenerative brain disease be called ‘type 3 diabetes’). Sugar makes us sick and is also addictive. There is a strong lobby emerging in parts of the UK and Europe that calls for us to consider legislation that restricts sugar in a similar way that policy has responded to tobacco.

Our children, in particular, need protection from the over-exposure they get to sugar during their early years when their brains are still underdeveloped, impulse driven and prone to learning addictive behaviour. In its 2011 ‘Special Report on Obesity’ – a call to action in addressing obesity – medical journal The Lancet says our children need special protection from high sugar foods, as well as the marketing forces that push them on us. This calls for a response from policymakers in government.

Think of refined sugar as the ‘anti nutrient’ – it strips the body of certain micronutrients while being digested and only gives energy in the form of glucose in return.

Monocrop sugar cane farming also has a huge environmental footprint in terms of water use, fertiliser run off, loss of wetlands and biodiversity, and using up atmospheric space through the carbon emissions used to farm, harvest, process and ship sugar.

Yet it gives nothing to us other than dead calories. Again, this raises questions about how responsible it is to use environmental resources that could be used to grow ‘real’ food, instead of this ‘dead’ nutrient. 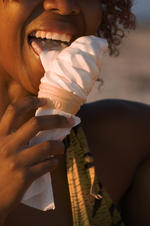 ©Roger de la Harpe
Limit your sugar intake to a minimum and view it as a treat.

There are various ways to avoid refined sugar:

Stop drinking refined sugar, or keep it as a rare treat. It’s in sugary and fizzy drinks, in very high quantities, which are often ‘invisible’ to us, in that we drink them down quickly without thinking how much extra calories they add to our daily intake. Don’t be fooled by the ‘health’ claims of certain drinks like low-fat drinking yoghurts, which also have extremely high sugar levels. Even fruit juice should be limited – rather eat fresh fruit, which is loaded with fibre and releases the sugar slowly into the body in a way that doesn’t spike insulin as much. One glass of fruit juice could have several fruit servings in it and releases that fructose too quickly into the bloodstream.

Lobby for retailers to get rid of the ‘aisle of temptation’ in stores that stock sweet at children’s eye level at the checkout queues.

Lobby for government to consider sugar restrictions in certain foods and to have greater transparency on labeling.

Fix the system, not the individual. While each one of us must take responsibility for how much sugar we consume, if we keep focusing on education and behaviour change for individuals as the root of the issue, we’ll never fix the problem. We need to see where the food system fails us in this regard.