©Louise Brodie
Hex River Valley, Western Cape, South Africa.
Rock paintings found in South Africa were painted by people called the /Xam, the southern branch of the San tribe of hunter-gatherers that have inhabited Southern Africa since the most ancient of times. Human skeletal remains found at archaeological sites in the southern Cape suggest that people of the same physical type as the San were living in this part of the continent as long as 120 000 years ago. The paintings that we see today date from the more recent part of the late Stone Age period, which is from 25 000 years ago to 400 years ago. Most of the paintings in the Western Cape are generally considered to be between 7 000 and 2 000 years old, although some are possibly older, and those in the Eastern Cape and Drakensberg are more recent. It is very difficult to date the paintings accurately, but some successful carbon dating and stylistic characteristics of the paintings have suggested these time frames.

Specific subject matter in the paintings would also give an indication of the painting’s age, for example, sheep and cattle as subjects indicate that the paintings were executed after the introduction of livestock into the Western Cape from the north approximately 1500 years ago. In the Cederberg area, there are paintings of men on horseback, ox wagons, and even a sailing ship, which clearly indicates that these were painted after the arrival of the European settlers.

©Marinda Louw
Giant's Castle, KwaZulu Natal, South Africa.
Many of the paintings have surreal elements, as they reflect the spiritual side of the San culture. Their spiritual beliefs are based on the concept of Shamanism, which is, in essence, connecting with the spiritual world through an altered state of consciousness. To achieve this, the tribe danced, clapped hands and sang for extended periods, and this induced a trance. The images that the shamans (medicine men) saw while they were in trances, were considered to be spiritual connections between them and their environment. During the trances, they believed that the shamans gained supernatural powers with which they could harness the potency of their natural surroundings, especially the animals, to ensure a positive outcome to their needs. These were healing the sick, contact with the spirit world and making rain. 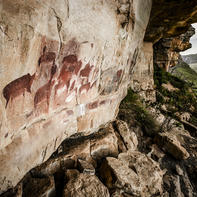 ©Roger de la Harpe
San Rock Art. Game Pass Shelter, Kamberg, Ukhahlamba Drakensberg Park, KwaZulu Natal, South Africa.
Most of the paintings were done on prominent rock outcrops, overhangs or caves close to a level clearing. The reason for this is that the clan performed their trance dance close by and afterwards, once the shaman had returned to normal consciousness, the images of the trance were recorded on the rock face. Very often, these sites resonate with a strong echo, which amplified the sounds of the trance dancing, and the /Xam also believed that this magnified the potency of the trance images that they painted. Sometimes paintings are also found at the entrance to caves that were used as shelters, as well as near good water sources.

©Roger de la Harpe
San Rock Art at Tandjiesberg, near Ladybrand, Eastern Free State, South Africa.
There are three main colours in the paintings are rust colours (from clay orange through to a reddish brown), white and black. The rust colour is predominant and was derived from crushed ochre stone. The white paint was made from white clay (kaolin), and the flaky texture of this paint explains why the white has often disappeared from the paintings. Manganese oxide and charcoal were most commonly used to make black paint. The San mixed these with certain plant juices as well as with human bodily fluids. They believed that body fluids had special potency and thus imparted potency to the paintings. For application feathers or stick fibers were used. 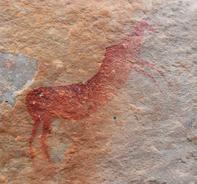 ©Louise Brodie
San Rock Art depicting a Shaman-Eland transition. Hex River Valley, Western Cape, South Africa.
What appeared to early researchers to be hunters disguised in animal skins turned out to be paintings of shamans who had assumed the characteristics of animals during trances. They were sometimes shown sprouting the head of a feline or the hooves of an antelope, and paintings of these therianthropes – half humans, half animals, are common.

Eland is one of the most common painted subjects as the species was viewed as a source of magic potency. When shot with a poisoned arrow, the eland’s hair stood on end, it sweated profusely, quivered and bled from the nose, like a shaman entering a trance.

For the San, these paintings were religious icons that literally radiated power, and even as the secrets of the San art are uncovered, the paintings are disintegrating. Natural forces erode the paintings, but worse still are the vandals who deface rock art. It is a frightening and very real threat that in under a minute, a can of spray paint can destroy something 5000 years old!

It is most unfortunate that these archaeological treasures are not receiving sufficient funding for preservation from the government, despite the potential they have to generate an income for surrounding communities. It is thus up to every visitor to ensure that the last exquisite testament of the San is not destroyed along with the artists who created it.By Louise Brodie
©2020 South Africa Online (Pty) Ltd. SouthAfrica.co.za. All Rights Reserved.