When I Have, I Give 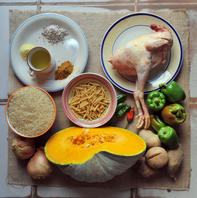 ©Eric Miller
Dinner for nine. Most of the food for this meal came from the Qhasane family garden, including the chicken.
Mapheello keeps her own family going on what her husband Thabiso sends home from his work on the mines – that includes herself, three of her biological children, a fourteen-year-old niece whose mother cannot take care of her, Thabiso’s aged father Lebona Qhasane, Mapheello’s mother Majoalane Mololi and uncle Koroseteni Mololi. Then there is the neighbour, whose husband is not working. They have seven children and they are struggling, Mapheello explains. So she gives them food from time to time. ‘When their mother is away they come here to wait for her and we eat together. When I have vegetables in my garden I give them because their mother doesn’t work in the garden.’

When asked if the people she helps out with food ever return the favour, she shakes her head. ‘Ah-ha. They don’t give. They think I’m wealthy.’ Wealthy she may well be – but it is not from lack of hard work from both her and Thabiso. However, she goes on to admit that there is a lady in the community who does give her some vegetables occasionally. Mapheello spends about R2 000 a month on electricity and groceries: mealie meal, flour, rice, milk, cornflakes, soap, washing powder and meat (red or white, depending on how much money she has). The bulk of it is spent on food, often to supplement the fresh produce she has in the garden.

The backyard is spartan but neat, with two long, orderly beds blooming with tomatoes, green peppers, potatoes, chillies, pumpkin (some seeds are drying on the kitchen windowsill for the next round of planting), green beans and maize at various stages of maturity. What fresh foods she does not get from the garden – like the onions this time around – she will buy from the market. The dry stuff – rice, maize meal and the like – she gets in bulk at one of the local supermarkets.

Until this weekend, the family had five chickens in a coop outside, but Thabiso slaughtered the last of them on the Saturday before his departure to work in the mines in South Africa. Some were for dinner on Saturday and Sunday; others were given to the neighbours or to family. When they slaughter a sheep from their small flock, they will freeze some of the meat, they will give some to the neighbours and some to their extended families, and then there will always be some extra for their own meals should anyone pop in for a visit. And there are lots of those.

Mapheello signed up as a volunteer health worker to help with the community-based TB medication roll-out a few years back. Now, when a new patient starts on TB meds, they will come to her every day for the first three months to get their tablets. After that, they are sent home with their own medication and take it from there. But often people will arrive hungry. You cannot take these meds on an empty stomach; it makes you sick, she says. So she will give them a meal. ‘This medication is strong. You need to eat when you use it.’

Mapheello also helps out with children in the community who are orphaned, many of whom are HIV-positive. She knows what it is like to grow up really poor. She remembers what it was like after her father died on the mines – the money stopped flowing. ‘It’s because I come from that background, of vulnerability, so I know how it feels. So I decided to help them, the children who are vulnerable.’ Many of them still live at home, and some are old enough to take care of themselves for the most part or have older extended family living with them, she says. ‘When I have food, I give them. When I have crops and vegetables from my garden, I give them. When I have food, I give them a feast here. Some organisation came to bring some food here to help but that was once.’

When she does not have any food to spare, she can try to get the children to the social welfare department, but it becomes a problem, she says, because they often do not have the proper documentation. ‘It becomes difficult when they don’t have documentation like the death certificates of their parents to access social grants.’ Sometimes she needs to get the chief of the village involved to help prove the children are orphaned. Every three months they will get around 300 maluti (the equivalent of R300). And those who are on antiretrovirals will occasionally get some food from the local clinic, but it is often in short supply.