©Roger de la Harpe
In the 6 million years in which proto-humans wended their way down the family tree towards us, its modern offspring, our diet consisted mostly of plants, which needed lots of time to chew and digest, releasing small numbers of calories in the process. Lots of work; little reward. Every now and then, we would get some meat, or maybe some fat, both of which have wallops of energy per gram, relative to fibrous plants. Ripe, sugar-laden fruits were only available seasonally on the savannas of Africa where we were evolving, and certainly not in neat orchards that provide truckloads of the stuff. Occasionally, if we were lucky, we would have some wild honey.
Those of us who found and used these energy-dense foods – even gorged on them on the rare occasion when we could – would have extra stores of body fat, allowing us to survive the regular famines that would sweep through the roving groups of our ancestors. Those of us who did not, died out. The survivors passed on a specific suite of genes to the next generation, genes that responded to these fats, salts and sugars by allowing them to tickle the reward centre in the brain, where dopamine is released. The more these foods triggered the pleasure centre of the brain, the more we sought them out; the more we sought them out, the more individuals with this genetic make-up thrived and survived.

Over time, the drive to run down salty, fatty, sugary foods and the pleasure they brought us, became more and more honed. But we had to work hard to get them, and rarely did we find them. Now, put factory-scale farming and industrial food processing into the equation, and we have all the salt, fat and sugar our poor craving brains could possibly want, wrapped up in cellophane or sealed in foil down at the local 7-Eleven store. The hunting and gathering efforts needed to get that packet of chips or chocolate are minuscule, meaning we burn off far fewer calories than the prize will dispatch into our bloodstream within minutes of ripping into the wrapper.
A similar sort of evolution probably happened to the recipes devised by the industrial food and beverage industries: the more their recipes triggered our pleasure centres, the more we bought those products; the more profit the industry made from us, the more they tailored their recipes to pleasure us.

©Roger de la Harpe
We have also evolved to have an ‘on’ switch that is much more sensitive than the ‘off’ switch – our bodies are quick to tell us when we need food, but slow to send out the message saying ‘okay, that is enough’. This is another survival mechanism for a roaming animal in a food insecure world, designed to make us gorge as a way of stocking up the pantry while there is food around, to tide us through the lean times between finding meals on the African plains.
So that is our blueprint: eat when we can, and eat lots of it; feast today, for tomorrow we might starve. It is a natural response to a boom-and-bust food economy of the ancient savannas. But sometimes faulty wiring gets us into trouble. One of the mechanisms behind our appetite’s ‘off’ switch is a hormone called leptin, which regulates our hunger pangs and fires up the metabolism. It is released by our body’s fat cells to tell us when we have had enough to eat. If, for some reason, your body either does not produce enough leptin, or has a genetic mutation that stops your brain recognising that it has been released, the off switch is not going to work too well and you will keep eating long after you have put enough food in your belly.

A team of scientists at Cambridge University’s Addenbrooke’s Hospital in the United Kingdom has spent over a decade looking at a rare genetic condition in which some individuals do not produce leptin. The result: perpetual hunger, the inescapable need to eat, and eat, and eat. One study, which looked at the case of two teenagers who suffered from congenital leptin deficiency, found that, firstly, the two were always hungry. Curiously, though, they did not discriminate between foods. Any food looked good to them. Broccoli, for instance, looked as delicious as chocolate cake. They would eat whatever they could, whenever they could, and were dangerously obese when the study started. ‘The boy weighed 103 kg by age 14,’ writes Roxanne Khamsi in New Scientist in 2007, ‘and the girl weighed 128 kg at 19 years old.’
Once they were given leptin artificially, both found their responses to food normalising. Looking at pictures of broccoli, for instance, did not trigger quite the brain excitement that pictures of chocolate cake did. Their appetites slowed down and their weight reduced to normal. The boy, writes Khamsi, was down to 50 kg within a year of leptin therapy.
But the plot thickens. In some people, a mutated gene stops the body registering leptin in the blood. So the person eats until they have had enough, the body’s fat cells release the body’s little ‘okay, that is enough, stop eating’ signals in the form of leptin, but the receptors in the brain do not pick up the message. So the person keeps on eating and gains weight. Again, a broken ‘off’ switch.

Not Entirely Victims of Evolution 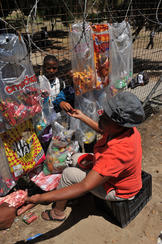 ©Eric Miller
Informal traders in Atlantis sell junk food to children through the school fence during break time.
The bad news, for those of us wanting to say that our extra love handles are completely beyond our control, is that for the most part obesity is probably not imposed upon us by our genes. Apart from a few rare, single genetic abnormalities, such as the leptin story, so far scientists have not discovered a gene to explain everyday obesity. So it looks like it is our environment and our behaviour that are to blame. This is bad news for those of us trying to resist the urge for a midnight visit to the fridge, but wanting to blame it on forces beyond our control.
Yes, our evolutionary programming is strong, but we should not forget the fact that we continue to evolve. Yes, our genetic roots are strong, but our buds are shooting out into a new, modern context. You cannot see genetics from only one perspective, as genes are always evolving. So although we carry the strong and, in evolutionary terms, quite primitive drives that are behind immediate cravings, in our frontal lobes we have also evolved the powerful capacity to work out what is good for us in the longer term and to say no to those urges.
Blaming the roots allows us to abdicate responsibility for the new shoots. But we are, in some respects, still victims of our environment. It is a perfect storm, a confluence of circumstances that pushes us to the wrong side of our ideal goal weight. This swelling global girth, The Lancet’s editorial argues somewhat sympathetically, ‘is the result of a normal response by normal people to an abnormal environment’. We are a complex animal with, it turns out, a phenomenal capacity for food, pleasure and social status.
The bottom line, though, is that it is more comfortable to feel full than to feel hungry. And now that we have so many easy ways to achieve that feeling of satiety, without having to work too hard to get it, we are becoming the thing we like to jeer at. We have supersized ourselves. The result is that our troubled relationship with the food is killing us, quite simply.