A Home Away From Home 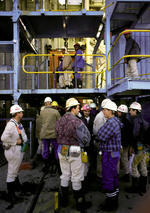 ©Eric Miller
The life of living in a home so far away from home is the story of over a century of migrant, mostly black, labourers who the mines have been recruiting from across the region since the first big discoveries of gold in the former Transvaal in 1896. They would pick up much of the cheap, unskilled, often illiterate labour from within South Africa, including from the apartheid-era Bantustans.

Some men would be brought in from neighbouring states like Angola, Tanzania or Zambia. But many, too, came from the landlocked and largely impoverished countries formerly administered as British High Commission territories – Lesotho, Swaziland and Botswana.

Thabiso’s story is not unique, and in exchange for spending most of his waking adult life scurrying around deep in the sweltering dark epidermis of the earth, Thabiso Qhasane takes home R5 000 each month: half goes directly to him; the other half is sent home via the recruitment agency as part of the deferred pay system, a legislated process put in place by the Lesotho government in 1974 to make sure that at least some of the miners’ wages is repatriated, rather than getting spent on the Reef and further impoverishing Lesotho.

Today remittances – all that wage money sent back home through the mining industry’s recruitment arm, which is given the job of handling these funds, or which is deposited into bank accounts in South Africa and withdrawn in Lesotho, or is sent home in the many other informal ways such as in the pocket of a friend – make up a quarter of Lesotho’s GDP. Now, Lesotho is one of the most migration-dependent countries in the world, according to Professor Jonathan Crush and colleagues at the Southern African Migration Project (SAMP).

‘Out of a population of around two million people, over 240 000 were recently estimated to be outside the country,’ he writes in a 2010 report on migration, remittances and development in Lesotho. ‘Migrant remittances are the country’s major source of foreign exchange, accounting for 25% of GDP in 2006. Lesotho is also one of the poorest countries in the world due to high domestic unemployment, declining agricultural production, falling life expectancy, rising child mortality and half the population living below the poverty line.’ Most households need this repatriated migrant wage to survive. ‘Households without access to migrant remittances are significantly worse off than those that do have such access,’ according to Crush.

Choosing Life as a Mine Worke

©Eric Miller
The pull of the mines is inevitable for so many Basotho men. With low literacy levels, limited skills, even fewer job prospects on the domestic market and a depauperate agricultural sector (the country’s cold, high altitude and mountainous terrain makes it prone to erosion, and only a quarter of the 30 000 square kilometres is suitable for agriculture), many men do not have much of an option. Time and again, a miner explains patiently that that is why he has stuck it out for so long. How else will he sustain his family, he asks. He just wants a better life for his children.

And so he has settled into the life of a mine-worker, living out most of his days and nights either below ground or in the mining compound. When he is not down the mine at night (working six days one week, five days the next; six days, five days), he sleeps the day away. He goes home one weekend a month, which sets him back R360 for a return trip. The rest of the time he will be in the mining compound, catching up with his ‘home-boys’, or watching some tellie, cheering on his team (Chiefs, of course), going to the gym, taking part in some traditional dances, playing a bit of soccer. He will phone home often from the public payphone. The longest he can go without calling is about two days; then the hankering for his family becomes too much. That is life on the mines.