Vulnerable to Diabetes and Heart Disease 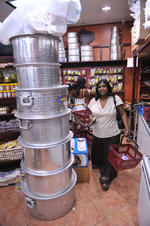 ©Eric Miller
An Indian woman does shopping for her household at a Durban spice shop.
Indian food may be as big in flavour as it is in volume, but that does not necessarily explain weight gain or diabetes, because there does seem to be something in the genes of this ethnic group that is stacking the health odds against them.

The Indian community in southern Africa – and, in fact, across the South Asian diaspora – is particularly vulnerable to the onset of diabetes and heart disease. The figures are quite remarkable.

According to Professor Yackoob Seedat at the University of KwaZulu-Natal’s Medical School, the risk factor for contracting type 2 diabetes is four times higher in the Indian community in South Africa than in the European community and tends to develop 10 years earlier in Indians than in whites.

Yes, the diet does tend to be high in polyunsaturated fats. Yes, there is not enough fibre. Yes, people in this community need to exercise more. But it looks as though there is a propensity to the kind of illnesses associated with being overweight.

Classified Overweight at a Lower BMI

Seedat says that insulin resistance and obesity seem to ‘occur at lower levels of fatness in Indians compared with whites’. Insulin resistance is the pre-diabetic state where the body does not respond as readily to insulin, which it needs so that fat and muscle cells can absorb glucose in the bloodstream, thus causing an unhealthy spike in blood glucose.

So much so, that the World Health Organisation (WHO) recommends that a healthier Body Mass Index (BMI) for Indians is two points lower than for whites. An Indian person will be classified ‘overweight’ at a lower BMI of 23 compared with a white person at a BMI of 25.25. Waist circumference is another way of measuring for obesity and here, again, the Indian community shows ‘much lower thresholds for waist circumference and increased risk of glucose intolerance... compared with whites’.

Doctors need to know that their Indian patients should be classified as ‘overweight’ earlier than white patients, and that they are therefore at greater risk of getting type 2 diabetes and coronary heart disease than whites. General practitioners need to step in and intervene sooner than with whites, argues Seedat.

How the Body Stores Fat 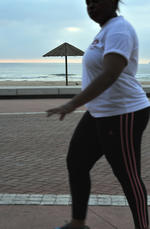 ©Eric Miller
Exercise is important to get rid of and keep off excess fat.
What is happening in the South Asian community, though, that they get ‘fatter’ more easily than other ethnic groups? Our bodies store fat in three main places: when there is more energy going into the body than going out, we first stash it away as fat in a shallow layer just beneath our skin, which is spread throughout the body and accounts for most of the fat on our limbs; then we begin to stock up fat in a deeper layer beneath the skin, mostly in the upper body; and then around the internal organs. It is the latter, the visceral fat, that is dangerous because it is the sort that increases the risk of diabetes and heart disease.

Someone with an apple-shaped figure, where they tend to get rounder above the hips rather than below the hips as in the pear-shaped figure, is more likely to get diseases like diabetes and heart disease because they are wrapping their organs up in fat.

In trying to explain why the Asian Indian community is so susceptible to these kinds of diseases, a team of scientists from Canada, India and Scotland put forward an idea that the space for storing fat just beneath the skin is smaller in South Asians than in whites.

This means that when the body gets too much energy going in, this storage compartment fills up faster in Indians than in whites and, indeed, in other ethnic groups, causing the fat build-up process to spill over into the deeper storage compartments in the body sooner, meaning the organs get wrapped up in fat at a lower rate of overall fatness.

‘This fat deposit around the organs is more “dangerous” than subcutaneous fat because it releases more harmful molecules into the body than fat under the skin does,’ explains Nigel Crowther, associate professor at the Department of Chemical Pathology at the National Health Laboratory Service and the University of the Witwatersrand. ‘These are biologically active molecules which, when they’re released at high levels, cause insulin resistance and may also affect blood pressure and how the body metabolises lipids, which are those oily, fatty substances in the body. ‘As body fat increases, so do blood pressure and lipid levels like cholesterol, and insulin resistance. The level of visceral fat correlates more strongly with increases in these, compared to other measures of body fat, for instance BMI.’

This argument – that the subcutaneous fat storage space fills up faster in Asian Indians than other ethnic groups, therefore spilling over fat storage into the organ area – is ‘a reasonable hypothesis on why Indians have more visceral fat’, maintains Crowther. Genetic studies have shown that about 50% of the variance in visceral fat storage in people is due to genetics. ‘So one can’t rule out the fact that the larger visceral depot in Indians is due to genetics, although nobody’s been able to show yet which genes affect body fat distribution in any population group.’