Beneath the Veneer of Plump Skin 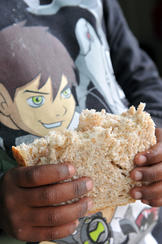 ©Eric Miller
One of the children at the ministry wolfs down a sandwich.
If it is true that an army marches on its belly, how much more so does an entire nation’s economic survival depend on the country’s children reaching the age of those found at the Malay Camp Children Ministries in De Aar, but having done so on regular helpings of wholesome, nutritious food? Five children at the Ministries are joined by a sixth, Brett, who pulls up at the gate shortly before lunchtime, driving a balding car tyre and a grin. He typifies the many children born into the kind of deprivation that leaves nearly 28% of children in the Northern Cape and one in five children nationwide stunted by the time they reach their fifth birthday.

Meanwhile, over a third of children (38.3%) in the Northern Cape are underweight, relative to one out of every ten nationally. Stunting, according to the World Health Organization (WHO), is a ‘chronic restriction in growth’ resulting in children being short in height for their age.

Brett and the others look spritely and fit. But the body is playing a sleight of hand, hiding its nutritional shortfalls away beneath the veneer of plump skin and what appears to be bounding energy. These children are a universe away from the pictures of emaciated toddlers from famine-weary Somalia, northern Kenya and Ethiopia earlier in that same year. That kind of starvation is the poster child for any notion of food insecurity. But that is the far end of the spectrum, the very worst of what happens to the human body in the absence not only of nutrients, but even just basic calories.

There are greyer areas on the continuum between bodies plump with full nutrition and the emaciated extremes of famine. There are places of deprivation that are less visible to the naked eye. A child’s body can look like it is running on high-octane fuel, even on a diet that is loaded up with basic energy (say, bread or mealie pap) but low on micronutrients. Basic calories will keep the engine ticking over, but the absence of key elements like vitamin A, vitamin B, zinc or iron means the system is perilously corroded on the inside.

The motor keeps running, but it is performing way below optimum. That is why prolonged malnutrition is called the hidden hunger – it is there, stealing a child’s potential, but it is invisible to all but the trained eye. This kind of deprivation could end up stalking children for the rest of their lives because prolonged malnutrition before a child reaches the age of two can leave a permanent and irreversible state of underdevelopment, not only of their bodies but of their very brains.