Fixing Our Cities and Our Climate

©Shem Compion
So, yes, the bad news is that our cities are making us fat and sick. The good news is that some of the buffers we need to ‘climate-proof’ our cities might offset the worst consequences of our swelling midriffs. Building a city up, not out, reduces the distances we need to travel, makes public transport easier and more affordable to implement, discourages single-car ownership and occupancy, and gets us moving our bodies again (in safer neighbourhoods, at least). Sprawling cities are more expensive to service than tighter, denser ones. It is about basic scales of economy.

One of the biggest hurdles to good nutritional security in poor communities is access to food, rather than whether or not there is enough food. For the urban poor, that means having a paying job, or social grants, to buy food. Moving and storing food in and around a tightly packed city is cheaper than doing so in a wide, sprawling one, so it should bring down food prices. A family living closer to key hubs – schools, shops, transport, the job market – will have more disposable income.

City densification also reduces the oil and carbon footprints per calorie of food. Already, southern African cities are home to 40% – and climbing – of the region’s population, most of whom are on the receiving end of an industrial food supply chain that is built on fossil-fuel-intense systems. Now we are faced with the end of cheap oil. And we are moving into a carbon-constrained future where shifting global geopolitics will not allow us to keep emitting greenhouse gases as we have been.

That means we have to cut back on food-related fuel use and carbon dioxide emissions, including at the city-level stage of the value chain. The moving, shipping, storing, cooling, serving, preparing, eating and disposal of food in our cities accounts for 30% of the urban carbon footprint. Eating junk food is not just bad for our health, but it is a waste of resources.

Using Up the Atmospheric Space 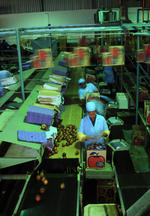 ©Eric Miller
Packing line at an apple farm in Grabouw, South Africa.
Every calorie that makes its way to the city – be it in a fresh carrot or a head of broccoli, in a hamburger or a can of cola – uses up a whole suite of ecosystem services to get there: the carbon-absorptive capacity of the atmosphere to soak up emissions associated with growing, harvesting, processing, shipping, packaging and cooling whatever goes into that can of cooldrink, for instance. That is not to mention the hectares of soil used to grow the sugar cane, the amount of water used to irrigate it, the energy used to carbonate the drink and the mining resources used to make the can.

Politicians and technocrats from 192 countries are still battling with the two-decade-long effort to come to an agreement under the United Nations Framework Convention on Climate Change on how much more space we have left in the atmosphere to keep dumping carbon emissions before we tip the system over into a state of dangerous climatic change, and who gets to use up that atmospheric space.

Think of it like this: you have a glass of water, filled to one finger below the lip (that is the emissions we have added to the system in the past 200 years). We only have one finger left of space to add more water before it spills over. Should we really be using up that valuable last bit of space on farming, processing and shipping empty calories? Cutting back on empty calories will be good for our health, and for our climate.

Take a look at the ‘Go Halfsies’ project, targeting the socially conscious foodie. Participating restaurants give their patrons the option of ordering a half portion of their meal but still paying the full price for it. The restaurateur donates that extra money to those in need, the patron gets a healthier serving and there is less food waste.

It would also be useful to have more transparency from the food and beverage sector on this issue. Printing information on the packaging that gives us not only the nutritional breakdown of the contents, but also the water and carbon footprints, should begin to steer some consumers away from the more carbon or water intense products.

Educating the public in the hope of changing behaviour, alone, is not going to work. Maybe a degree of state intervention is appropriate with regards to the practices of the fast food and processed food industries, related to what food they produce, how they package it and what methods they use to market it to a hungry and often addicted public.