Brood parasites are birds that make use of host parents to brood and rear their young. They do not build nests of their own nor do they play any parental role in raising their offspring.

Only about one percent of all birds use brood parasitism as a breeding technique. Having a host family raise their chick’s means that brood parasites expend less energy on the breeding effort themselves thus improving their own chances of survival. But more importantly, brood parasites are able to produce many broods in one season, which is not possible for birds that raise their own offspring.

In southern Africa, there are five different groups that practise brood parasitism. These are the Cuckoos, Honeyguides, Indigobirds, Whydahs and the Cuckoo Finch (part of the weaver family). Honey-guides are the only family where the entire family is brood-parasitic.

Brood parasites and their young use a number of different techniques to ensure that the host parent gives the intruder the attention it requires. Tactics used by brood parasite chicks are innate and instinctive. The chicks are driven to behave the way they do from hatching as it is fundamental to their survival.

The parent bird or chick (once it hatches) may evict the host’s eggs or chick in order to replace them with their own. Some cuckoos have scoop-shaped backs to facilitate this. Removing eggs or other chicks affords the brood parasite the undivided attention of the host adult and completely removes all competition for resources. Sometimes only a single egg is removed as this helps to trick the host so that it doesn’t notice the sudden addition of an egg. Some hosts will expertly recognise foreign eggs and kick them out the nest. To compensate, the colour of the eggs laid by the brood parasite will often match those of its host precisely, especially the more host-specific parasites.

Brood parasite’s chicks are usually larger than their hosts and quickly outgrow and out-compete their host siblings to their own advantage and often to the host’s offspring’s demise. Some species trample and smother the other chicks in the nest due to their larger size while other species (like Indigobirds and Whydahs) are simply reared alongside the host’s brood. The honeyguides are especially intentional about getting the competitive edge and their chicks are equipped with a bill hook on hatching which they use to lacerate and destroy their host’s chicks.

Once it has overcome the competition, the brood parasite still needs to ensure that the host parent will feed it as it grows more obviously different every day. To induce this, the brood parasite chick has the same colour gape with similar markings (palatal spots) as the host chicks. The colour or pattern of the gape revealed during begging is unique for each species and is what induces the adult to feed the chicks.

The survival of a brood parasite chick is further enhanced by the fact that parasites that infest birds and their nests are also host specific. The parasitic fledgeling will be immune to infestations of pests that affect the host birds.

Brood parasites may be very host specific in their choice of species to brood their young. For example, the village indigobird will only parasitise the Red-billed Firefinch even mimicking its call to enable it to get close enough to the fire finches to locate the nest and lay a matching egg.

Other species are less host-specific but may use bird hosts that exhibit similar nesting habits, e.g. the scaly-throated honeyguide parasitises hole-nesting species such as woodpeckers and barbets. Diederick’s cuckoo and greater honeyguides are generalist, using 24 and 36 species of hosts respectively. 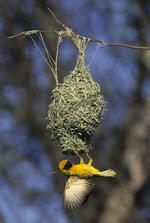 An example of this would be the size of some weaver’s nest tunnels. These are large enough to accommodate the weaver parents but not quite large enough to accommodate a Diedericks cuckoo (a common weaver parasite). There are records of cuckoos getting stuck and dying in the just-too-tight tunnels of weavers. The arms race is, however, ongoing and as the hosts evolve, so too do the parasites as their survival is also at stake.

Although brood parasites never meet their own parents and are completely raised by a host species, they still know their own songs. The call of a brood parasite is inherited in its genes and is not a learned skill. In this way, they will attract the correct species of mate later in life.